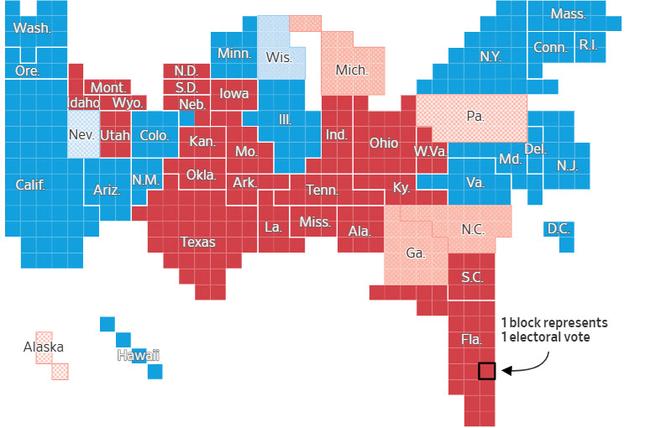 
Chaos. That’s the best way to describe what has happened in the past 12 hours.

Initially Trump shocked pollsters – again – after winning Florida by a whopping 370K votes where a surge in Hispanic support crippled hopes for a Biden landslide, followed by wins in Ohio and Texas. The early momentum saw Trump’s winning odds at online bookie Betfair surge as high as 80%. However, the momentum reversed after Biden managed to “flip” Arizona back to blue while the outcome remained unclear in six swing states — Georgia, Michigan, Nevada, North Carolina, Pennsylvania and Wisconsin — all of which are still counting votes, and while we may get some final vote counts today, others could take a few days.

… this is how close some of the key battleground races were as of Wednesday morning:

In a nutshell, Biden needs to make continued progress in the likes of Pennsylvania (results possibly could be out as late as Friday), Michigan (results may be a few days) and Wisconsin (results could be out on Wednesday), although with most of the outstanding ballots mostly mail-ins, consensus is that they will favor Biden, because more Democrats than Republicans voted early this year. The question is will this be enough to flip Trump leads in key states.

And speaking of the reversal in momentum in Michigan and Wisconsin, this is how it happened:

Oh they just found a bunch of Biden ballots chillin in the attic overnight no big. pic.twitter.com/e5YUC5QneY

As a result, Biden is now a 75% odds-on favorite to win the presidency at Betfair, a dramatic reversal from earlier when Trump was seen as an 80%-odds favorite. Why? Because if Biden holds onto his lead in Nevada and Wisconsin, he would need to win only one of three states — Georgia, Michigan or Pennsylvania — to secure a majority of electoral votes, and could still lose North Carolina.

Whether this reverses again in the coming hours will depend on the outcome of the mailed-in ballot vote count in key states like Wisconsin, Michigan, Pennsylvania, Georgia and North Carolina. Incidentally, Fox decision desk guru just told Fox & Friends “he’d rather be Biden than Trump in Michigan and Wisconsin and that if Biden wins those states — threw in Nevada for good measure — Biden is the next president.”

Fox decision desk guru just told Fox & Friends he’d rather be Biden than Trump in Michigan and Wisconsin and that if Biden wins those states — threw in Nevada for good measure — Biden is the next president.

No matter the final outcome, Trump dramatically outperformed initial polling estimates, and even the NYT admits that “many of the state polls were wrong and underestimated support for Republicans — again.” A big question in coming days according to the NYT will be “why: Did polls again fail to include enough working-class white voters, as was the case in 2016? Or was it something else?” (spoiler alert: it was something else, and it’s called poll bias being constantly in the Democrats’ favor).

It is also notable that Trump managed to improve his overall popular vote count by nearly 4 million from 2016, rising to 66.75 million versus 62.98 million, and as David Rosenberg puts it, Trump clearly has more than just a “base” supporting him. Or there are a lot of folks who feared a Blue Wave/move to the left. “America is never going socialist. That’s one message among many.”

Meanwhile, Biden has not made as much progress in key areas as was expected, while the loss of Hispanic support in Florida should serve as a major warning for Democrats, with even the NYT admitting “Democrats struggled to match their 2016 margins among Hispanic voters” which hurt Biden, “especially in Florida and Texas.”

The two candidates took to addressing the nation shortly after midnight, with Biden coming up first, and urging patience.

“We believe we’re on track to win this election,” he said. “We’re going to have to be patient until the hard work of tallying the votes is finished. And it ain’t over until every vote is counted, every ballot is counted.”

This was followed by Trump at 2:30am when he declared himself the winner, and said he would call on the Supreme Court to stop counting ballots in states where he led, while urging more counting in states where he was behind. Trump also claimed “fraud” and he called the election an “embarrassment to the country.”

Trump’s declaration prompted the Pennsylvania Governor to warn that over 1 million mail-in-ballots are yet to have been counted.

At this point the “blue checkmarks” on Twitter lost it:

And so on. The Biden campaign also countered that “the president’s statement tonight about trying to shut down the counting of duly cast ballots was outrageous, unprecedented, and incorrect.”

While questions remain over the presidential race, things are much clearer in the Senate where the widely anticipated Blue Wave has crashed as hopes for a Democrat takeover fizzled, as Republicans now are in a strong position to retain Senate control, which would give them a veto over nearly all of a President Biden’s legislative plans, and collapsing hopes for a massive stimulus (which is also why the reflation trade is crashing and burning this morning, with tech stocks and Treasurys soaring).

According to the NYT, Democrats needed to win at least five of the 14 competitive Senate races and have so far won only two. Six races remain up in the air. The only incumbent Republicans to have lost are Martha McSally in Arizona and Cory Gardner in Colorado.

Finally, here are some of the notable state-ballot initiatives:

And while one can debate if Trump or Biden was the winner, the biggest losers of the night were pollsters who once again showed their clear Democratic bias and prompted questions over whether this industry should even exist.

1) Biden is well on his way to flipping MI & WI (in addition to AZ & #NE02) and is doing well enough in PA’s completed counties to be on track to win there
2) Polls (esp. at district-level) have rarely led us more astray & it’s going to take a long time to unpack