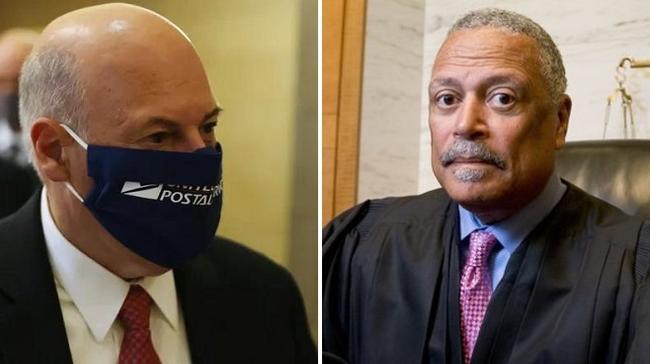 
US District Judge Emmet Sullivan may haul Postmaster General Louis DeJoy into court to testify over why the USPS failed to follow court orders to conduct a ‘mandatory sweep’ of mail-processing facilities to look for undelivered ballots by 3 p.m. on election day.

“At some point, the postmaster is either going to have to be deposed or appear before me and testify under oath,” said Sullivan – who made headlines earlier this year after fighting the DOJ’s request to drop the case against former National Security Adviser Michael Flynn – leading some to speculate that he’s a ‘deep state’ judge.

“The court has been very clear that it expects full compliance” with his orders, Sullivan added, blasting the US Postal Service’s legal team for failing to promptly notify him after the agency realized it couldn’t meet the deadline he established for the agency in more than a dozen troubled regions, “many in Democratic-leaning urban areas or swing states,” according to Bloomberg.

“The court would have been very sensitive to any complaints that it was impossible to comply with the order,” said Sullivan, adding “It just leaves a bad taste in everyone’s mouth for the clock to run out, game over. There was not compliance with a very important court order.”

On-time delivery has taken on a new urgency amid a surge in the use of mail-in ballots during the pandemic and Republican efforts to block the counting of ballots that arrive after Election Day. Lawyers for the plaintiffs in the case, including the NAACP, said it was imperative for the USPS to focus on continuing to deliver ballots in states that have extended deadlines for accepting votes postmarked by Nov. 3. Sullivan asked to hear testimony later Wednesday from USPS executive manager Kevin Bray, the lead for processing 2020 election mail. -Bloomberg

Sullivan’s order to sweep included facilities in Democratic strongholds such as Philadelphia, Atlanta, Detroit and Houston, as well as battleground states such as Florida and Arizona. Facilities which were targeted were suffering from ‘substandard performance’ for delivery of election mail, according to the report.

On Wednesday, the agency said it had searched for ballots in over 200 facilities.