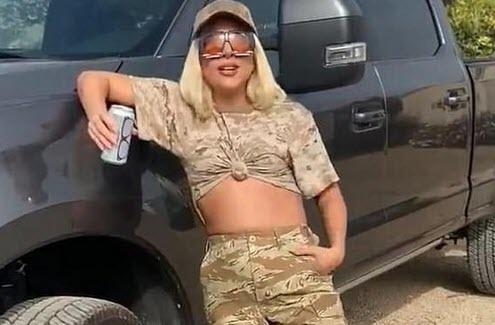 
Singer Lady Gaga has come under fire from working class Americans across the country after a video she posted to Twitter shows her not only endorsing Joe Biden, but apparently mocking rednecks in swing states while doing so.

This weekend the singer posted a video of herself opening a can of beer, dressed in camo, while standing next to a large pickup truck and preaching about who she voted for.

“Hey, this is Lady Gaga. I’m voting for America, which means I’m voting for Joe Biden,” she opens the video by saying. “And if you live in Minnesota, Pennsylvania, Georgia, Michigan, Florida, or Arizona, I encourage you to vote,” she continues, in an obvious attempt to drum up support in swing states.

“Cheers to the 2020 election,” she says after taking a drink from her beer and then slamming the can on the ground.

The video, which was supposedly trying to make some kind of statement (though we don’t know what) was widely slammed by swing state voters on social media.

One woman responded: “I don’t own a truck, never worn camo or drank a beer so if this is your idea of #TrumpSupporters you’re dead wrong; we’re college educated, hard working people who love our country but nice try GaGa.”

Another voter from South Carolina and highlighted by The Daily Mail said: “Stunts like this, are exactly why Trump is going to win. Average, hardworking Americans are sick of ‘celebrities’ mocking them for what they wear, drive, eat, drink, and where they choose to work or live.”

“This is one of the most tone-deaf things I’ve seen this whole election cycle. You’ve just produced an ad for Trump’s re-relection,” said a third voter.

Another social media user called the video “cringe AF”, stating: “Love ya Gaga but this Vid is Cringe AF. It feels insincere & literally makes me not want to vote at all. I honestly wish you never got involved in politics publicly because it’s distracting from the Power of your Musical & Performing Talents. Politics is a Dirty Game Sis.”

Trump’s campaign communications director Tim Murtaugh also lashed out at the singer, who Tweeted a photo of herself in Pennsylvania on Sunday in response: “Nothing exposes Joe Biden’s disdain for the forgotten working men and women of Pennsylvania like campaigning with ant-fracking activist Lady Gaga.”

He continued: “This desperate effort to drum up enthusiasm for his lackluster candidacy is actually a sharp stick in the eye for 600,000 Pennsylvanians who work in the fracking industry.”

Wouldn’t it be something if Gaga’s video had the opposite of its intended effect in swing states? We’ll know tomorrow exactly how effective it was.