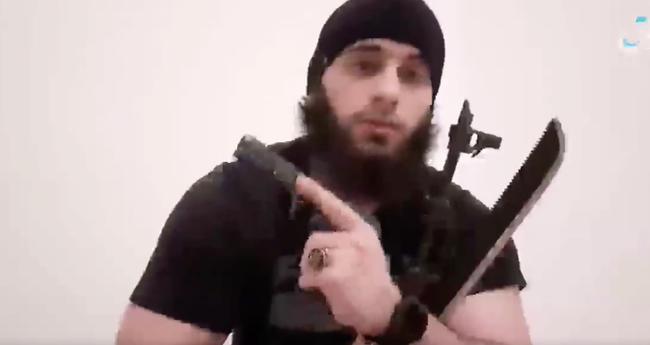 
Update (1330ET): A man clad in black brandishing two guns and a machete has released a video claiming credit for ISIS in last night’s terror attack in Vienna.

Though we weren’t able to translate the speech, French media outlet France News 24 reported on it, and other European media outlets have started to cite it.

A statement bearing a similar message has also been reported via the group’s Telegram channels.

Investigators are believed to be looking for others who were involved in the Vienna attack.

Update (0845ET): Austrian police have arrested a man in Linz, the third-largest city in the country and the capital of the northern part of the country, according to reports by a local broadcaster, cited by Reuters.

The individual, described as an Islamist, was led out of the house in handcuffs by heavily armed police. The individual was identified by some media as a “suspect” in Monday’s attack.

It’s not clear yet whether the individual arrested is linked to the attacks.

Now that the dust has cleared, police in Vienna have finally had some time to piece together more details from Monday’s brutal attack in the Central European city. Vienna is a European cultural powerhouse, but it has seen far fewer terror attacks over the last 20 years than many of its neighbors. But on Monday night, a gang of assailants struck at six areas in downtown Vienna, attacking pedestrians and police.

Overnight, the number killed in the attack swelled to 5, 4 victims, and 1 assailant, while 17 others were wounded in the shooting, The dead attacker was identified as a 20-year-old Austrian-North Macedonian dual national who had one prior terror conviction. Interior Minister Karl Nehammer confirmed that the prior conviction was for membership in a terrorist organization. The attacker who was killed, whose name was Kujtim Fejzulai, was sentenced to 22 months in prison in April 2019 because he had tried to travel to Syria to join the Islamic State, though he was granted early release under juvenile law.

At least one other attacker is believed to be on the run, Nehammer said. The terrorist who was shot in killed was wearing what authorities initially believed to be an explosive vest, though it “turned out to be a dummy”.

His apartment was raided in the night, authorities said. Though there were reports on Monday about a gang of attackers striking at six separate locations, it’s currently unclear exactly how many participated in last night’s attack. The FT and AP reported that it isn’t clear whether Fejzulai, a known ISIS member, was acting alone.

The victims included two men and two women. 7 others are in life-threatening condition from gunshot wounds and cuts. During comments made early Tuesday morning in Vienna, Chancellor Sebastian Kurz affirmed that the incident was “clearly an Islamic terror attack.”

Authorities still couldn’t say whether more attackers might be on the run. Workers were asked to stay home if possible on Tuesday, and children were dismissed from school until further notice. The city’s public transit was closed.

Some 1,000 officers were on duty to help with the investigation while the army was brought in to guard soft targets across the city.

The shooting started at around 2000 local time as people headed downtown to enjoy one last drink before new coronavirus lockdown measures came into effect. The assailant who was killed was shot at around 2010, according to Vienna police chief Gerhard Puerstl.

Kurz’s government ordered three days of official mourning, with flags to be flown at half-mast. A minute of silence was held at noon on Tuesday.

The video below was among the earliest to hit social media after news of the attacks broke.

The attack comes as France has been hit particularly hard, with at least two incidents where victims were ‘decapitated’ by attackers armed with knives last month. President Emmanuel Macron publicly defended the right for secularists to publish cartoons featuring the prophet Mohammad. Several Muslim world leaders have attacked Macron for his defense of the Charlie Hebdo cartoons. A class on freedom of expression featuring the cartoons allegedly motivated a young Islamic extremist to murder French teacher Samuel Paty.

Leaders from around the world offered their condolences to Austria, and condemned all violence tied to radical Islamist extremists.