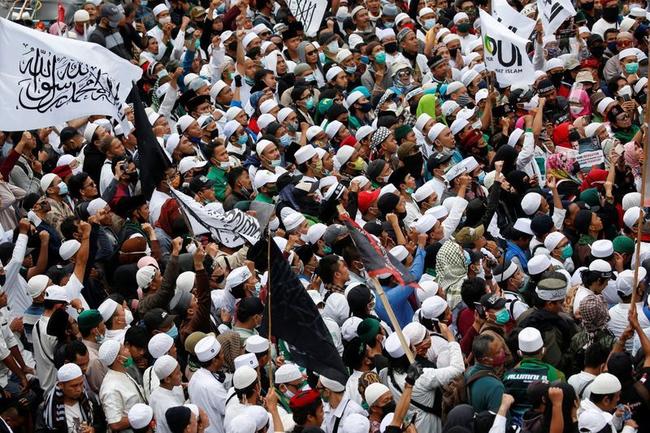 
Monday witnessed demonstrations unprecedented in size by hardline Muslims in Bangladesh as tens of thousands flooded the center of Dhaka, the capital city. The country’s largest Islamist group, Hefazat-e-Islam, is pressuring the government to sever all diplomatic and economic ties with France over accusations that President Emmanuel Macron made ‘anti-Islamic’ statements after recent terror attacks wherein he condemned “Islamist terrorism” and said that global Islam is “in crisis”. Smaller but fierce demonstrations were also reported in Indonesia Monday.

“We are giving an ultimatum to the government to end diplomatic ties with France within 24 hours,” said Junayed Babunagari, head of Hefazat-e-Islam. “If our demands are not met, we will announce our next course of action,” he added amid shouts of approval from the crowd.

There’s been days of similar demonstrations in other capitals with large Muslim populations where rioters have sought to reach the local French Embassy, such as happened days ago in Islamabad, Pakistan when the embassy there came under attack by rioters hurling stones.

Another Bangladeshi protest leader on Monday was cited in AP as saying protests would not cease until Macron apologizes and recants his remarks. “I ask the French government to apologize to the 2 billion Muslims in the world,” a protest leader identified as Nur-Husain-Kashemi said.

“I also ask the world’s Muslims to demonstrate their faith by boycotting French products and terminating diplomatic relations with France,” he added.

▶️ Thousands of Muslims marched through the streets of Bangladesh’s capital of Dhaka, Monday, in protest of French President Emmanuel Macron.

It doesn’t look like the government is ready to follow through anytime soon, particularly given France remains the fourth biggest single export destination for Bangladesh’s crucial ready-made garment industry.

Given Monday’s horrific terrorist attack in Vienna in a predominantly Jewish neighborhood, and which follows on the heels of deadly attacks in France, it appears the political Islamists are advancing a “clash of civilizations” narrative akin to the lead-up to the 2015 Charlie Hebdo massacre.

More than 1,000 police were reportedly deployed around the French Embassy in Jakarta, and also blocked off the road leading to it.