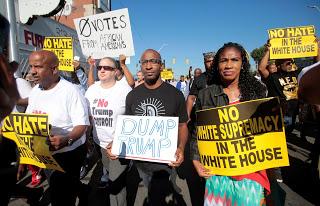 To say this election has been divisive is an understatement. A great number of people are angry and pissed off over various issues. Most Americans are hanging on to the hope their candidate in the Presidential election will be victorious. Expect a huge spike in emotions when the reality hits those that are wrong. Few voters are prepared for the reality that their man has gone down in flames and facing their interpretation of what that will mean in the next few years. The very personal and raw emotions of many Americans will only become apparent when the winner is finally announced.

All this may be made worse by the fact results as to who will be sworn into office come inauguration day may not come in immediately. This may drag on for weeks even months. On January 20th this does not end, for many voters, it will only be starting. The thrilling feeling your man will be victorious will turn into growing apprehension and fear for those disappointed by the results of this election. These feelings will not fade gracefully into the night.

Families have been divided and friendships ended because of differing views of whether to support Donald Trump or Joe Biden. Not only do many voters strongly dislike or “hate” one or the other of these men but this extends to what they stand for. To many voters, Trump and his Make America Great Again agenda is void of compassion. Adding to this is the fact he has been branded a liar because he tends to stretch the truth. Biden on the other hand has been demonized as an old school politician that sells out America and panders to the socialist left.

Much of this feeds into how we as Americans will be treated and the path our country will take going forward. The economy, taxes, and the budget are all concerns. Growing inequality must be addressed going forward but much of what we have seen occurring has been because of Fed policies. Raising taxes is another difficult issue because it is difficult for the working middle-class to think they will not be hit when efforts to redistribute wealth take place, part of this is because taxing the rich will simply not generate enough money to pay for even a fraction of the social programs that have been proposed.

This has been a polarizing time signified by a take no prisoner attitude. The idea America will not survive four years of this or that guy has been put out there and accepted by many Americans and claims that the results will be rigged are also rampant. The balance of political power will also be  decided by whether the Senate also falls in line with the same party that wins the White House. It may be the best many Americans can hope for if their man fails is political gridlock.