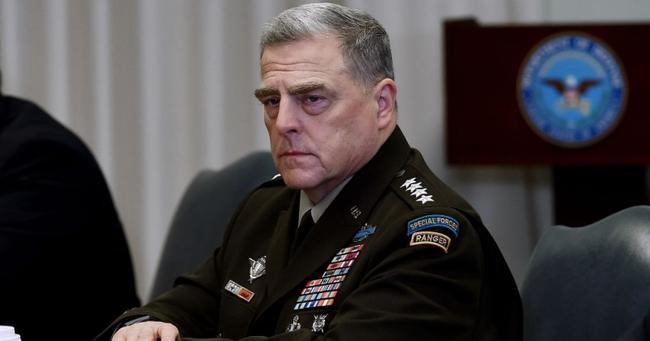 The Chairman of the Joint Chiefs of Staff held an off-the-record video meeting with TV anchors from CNN, ABC, CBS, NBC, and Fox News in which he asserted that the U.S. military will not intervene in the aftermath of the presidential election.

According to Axios, “The nation’s top military official set up Saturday’s highly unusual call to make clear that the military’s role is apolitical.”

Mark Milley also sought to “dispel any notion of a role for the military in adjudicating a disputed election or making any decision around removing a president from the White House.”

The meeting followed Joe Biden’s recent remark to the Daily Show’s Trevor Noah that he was “absolutely convinced” the military would “escort [Trump] from the White House in a dispatch” if he refused to leave office.

As we highlighted earlier, National Guard troops are already in place in several U.S. cities in preparation for any civil unrest, with polls showing 77% of Americans fearing violence to be likely.

The Biden campaign has already asserted that “under no scenario” will it allow Trump to claim victory tonight.

The former Vice President is also planning to address the nation and “assert control” as the president-elect if he is declared winner by news organizations, even if President Trump refuses to concede.

Druckenmiller: “We Are In Deep Trouble… I Don’t Rule Out Something Really Bad”