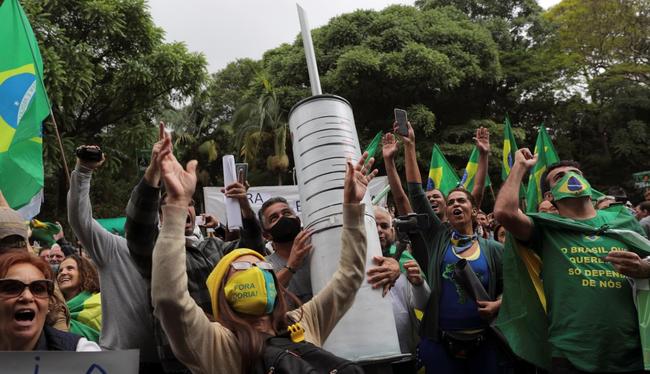 
Western media outlets like the NYT would have their readers believe that Brazilian President Jair Bolsonaro is a madman reviled by his own people, while attributing his historic electorial victory to some kind of fluke, or (even worse) judicial ‘meddling’ to keep corrupt ex-president Lula from winning another term.

The reality, of course, is that Bolsonaro, like President Trump, has a devoted core following who would back him over virtually any challenger. And despite all those reports about Brazil’s ‘collapsing’ health-care system, more than 300 demonstrators gathered on the main commercial throughway in São Paulo to protest State Governor João Doria’s push for mandatory vaccinations using a vaccine developed by China’s Sinovac.

The governor has previously backed making immunizations mandatory once vaccines are available to all. The chief justice of Brazil’s Supreme Court has said the court will ultimately decide on the issue, though, as Reuters pointed out, a number of vaccines are already obligatory in Brazil, including Hepatitis B, which is given to every newborn.

Tens of thousands of residents in the city have already received the Sinovac vaccine as the company continues with Stage 3 trials in the area. The program seemed to have infuriated the protesters, as they waved signs claiming “we’re not guinea pigs!” Reuters reported that the “tightly packed” protesters,

“We’re against the authoritarian Chinese ambassador João Doria, who would now make the vaccine compulsory against our wishes,” protestor Andre Petros said.

“This doesn’t happen anywhere in the world, not even in China.”

Brazil has the third-largest outbreak in the world, with 5.5 million confirmed cases.

Brazil’s federal health ministry announced last month it would buy 46 million doses of the vaccine, contingent on regulatory approval, in a deal supported by state governors. But a day later right-wing President Jair Bolsonaro said that Brazil would not buy the vaccine.

The Brazilian federal health ministry announced last month it would buy 46 million doses of the vaccine, contingent on regulatory approval, in a deal supported by state governors, but one day later, Bolsonaro stepped up to trash the deal.