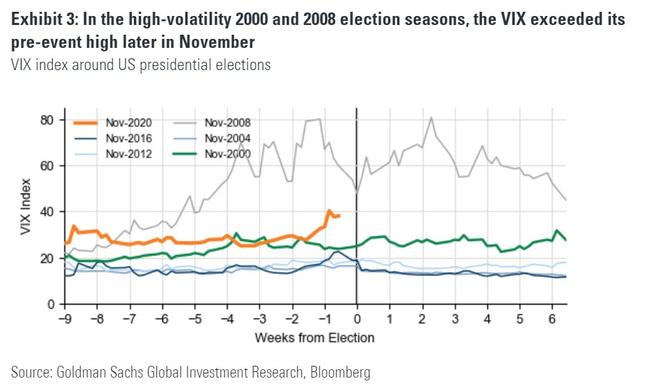 Ahead of tomorrow’s election, implied volatility has been at its highest point since June and at a near-record premium to realized volatility, despite a volatile week.

With surging virus cases raising the risk of further lockdowns and initial data on vaccine candidates expected soon, Goldman notes that the election may not even be the most important near-term driver of markets in this complex volatility environment.

The VIX’s 80% and 15-point premiums to exponentially weighted realized vol have been rare historically, and one way these can return to normal would be for a clear election result to drive implied volatility much lower. However,

(1) close races in key states that will be accepting mail-in ballots that arrive later than Election Day, reducing the odds that results will be known this week, and

In the high-volatility election periods of 2000 and 2008, the VIX exceeded its pre-election peak later in November.