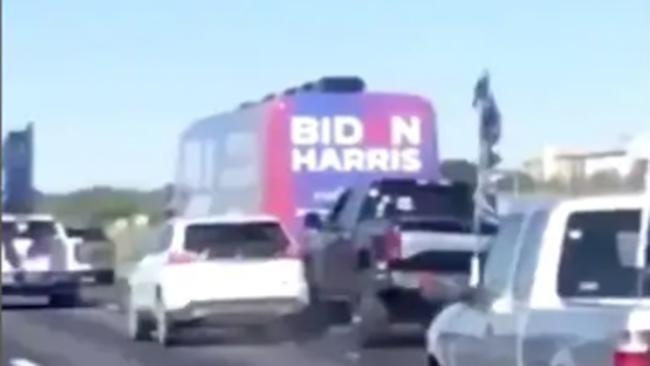 
A Biden campaign staffer driving a white SUV ‘may be at fault’ after colliding with a  Trump supporter’s truck on a Texas highway on Friday, after a ‘Trump Train’ of trucks surrounded a Biden campaign bus to ‘escort it’ out of the state, according to WFLA.

“The at-fault vehicle may be the white SUV and the victim appears to be the black truck,” said the San Marcos, Texas Police Department in a statement after reviewing the crash via online videos.

Over the weekend, the Texas Tribune reported that the FBI was investigating the incident.

“The Federal Bureau of Investigation is looking into a Friday incident in which a group of Trump supporters, driving trucks and waving Trump flags, surrounded and followed a Biden campaign bus as it drove up I-35 in Hays County, a law enforcement official confirmed to The Texas Tribune Saturday,” according to the report.

In a video of the incident, a black truck can be seen occupying the far right lane behind the Biden bus, which was weaving between lanes. A white SUV driven by a Biden campaign staffer can be seen encroaching on the truck driver’s lane when a collision occurs and the truck driver ‘pushes’ the SUV back out of their lane.

In Texas, Trump supporters are following around the Biden bus. A bad tactic because it only draws attention to it.

Of course, the media used it to bash Trump supporters for causing a crash. The video clearly shows a deranged Biden supporter intentionally rammed the truck. pic.twitter.com/e4zN491aah

Option 1: Biden staffer is confused because the bus is straddling two lanes. Staffer THINKS the truck is moving left when it’s actually the bus.

Option2: Biden staffer is stupid enough to try to run the truck off the road. pic.twitter.com/LlZI7DzoIi

On Sunday, President Trump wrote over Twitter that the Trump caravan “did nothing wrong,” adding “Instead, the FBI & Justice should be investigating the terrorists, anarchists, and agitators of ANTIFA, who run around burning down our Democrat run cities and hurting our people!”

In my opinion, these patriots did nothing wrong. Instead, the FBI & Justice should be investigating the terrorists, anarchists, and agitators of ANTIFA, who run around burning down our Democrat run cities and hurting our people! https://t.co/of6Lna3HMU

As the Daily Wire notes, Texas GOP Chairman Allen West similarly responded: “Where is the liberal corporate media’s concern about that real violence?” adding “It is more fake news and propaganda. Prepare to lose…stop bothering me.”

Naomi Narvaiz, a Texas Republican Party official in San Marcos, told The Texas Tribune that Trump supporters “decided we would jump on 35 to show support for our president. I didn’t see anyone being overly aggressive.” –Daily Wire