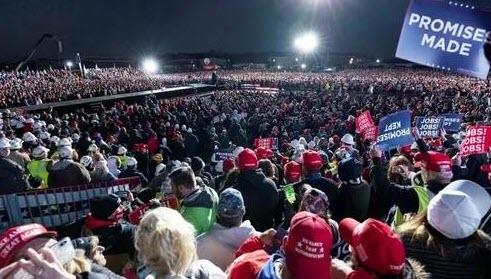 
The Pittsburgh Post-Gazette – a well known paper in a key battleground state – came out on Sunday morning and announced their endorsement of President Donald Trump. It’s the first Republican the paper has endorsed for President since 1972 – nearly fifty years ago.

In an editorial called “The Man And The Record“, The Pittsburgh Post-Gazette makes the case for shaking off arguments about Trump’s personality and putting a focus on his record.

The editorial starts by asking what is important when choosing a president. “Isn’t the real question whether he has been taking the country, and the economy of this region, in the right direction these last four years? Can we separate the man from the record?”

The paper also started by acknowledging many of the personality flaws that are often brought up when discussing President Trump: “We share the embarrassment of millions of Americans who are disturbed by the president’s unpresidential manners and character — his rudeness and put-downs and bragging and bending of the truth.”

But then, it does something that many on the left are unable to do: it looks at, and judges Trump, based on his record.

“Let’s look at the Trump record,” the piece says. “Under Donald Trump the economy, pre-COVID, boomed, like no time since the 1950s. Look at your 401(k) over the past three years. Unemployment for Black Americans is lower than it has ever been, under any president of either party. Under Mr. Trump, our trade relationships have vastly improved and our trade deals have been rewritten. Thanks to him, middle America is on the map again and the Appalachian and hourly worker has some hope.”

The piece notes that Trump has put America first, the way he said he would:

No one ever asked the American people, or the people in ‘flyover,’ country, if they wanted to send their jobs abroad — until Mr. Trump. He has moved the debate, in both parties, from free trade, totally unfettered, to managed, or fair, trade. He has put America first, just as he said he would.

And it praises him for appointing Amy Coney Barrett: “He also kept his promise to appoint originalists to the Supreme Court of the United States. His third appointment, Amy Coney Barrett, is the best of all — a jurist whose mind and character and scholarship ARE first class. We hope she stands against both judicial and executive excess.”

And you can’t talk about Western PA without talking about the energy industry: “Finally, let’s talk about one of the most important concerns in this region — energy. Under Mr. Trump the United States achieved energy independence for the first time in the lifetimes of most of us. Where would Western Pennsylvania be without the Shell Petrochemical Complex?”

Finally the Post-Gazette rails Joe Biden as “too old for the job, and fragile” and says Kamala Harris “gives no evidence” of being ready to takeover for Biden:

Mr. Biden is too old for the job, and fragile. There is a very real chance he will not make it through the term. Mr. Trump is also too old but seemingly robust. But in Mike Pence, Mr. Trump has a vice president ready to take over, if need be. He is a safe pair of hands. Sen. Kamala Harris gives no evidence of being ready to be president.

“Donald Trump is not Churchill, to be sure, but he gets things done,” the paper concludes. You can read the full endorsement here:

This newspaper has not supported a Republican for president since 1972. But we believe President Trump, for all his faults, is the better choice this year.