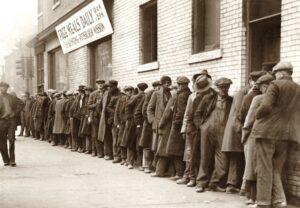 Jim Rogers is not only one of the most successful investors of our era, he’s also an avid scholar of history.

Seeing that the world is buried under an unprecedented mountain of debt that is requiring more and more central planner intervention to keep from imploding on itself, Jim says history is clear on what happens next.

A clearing of the debt either via massive default, or destruction of the currency it’s denominated in.

He looks into the future and sees a terrible reckoning ahead; one he predicts will be “the worst economic crisis of my lifetime” — and Jim is 78 years old.

So where should investors look to preserve the purchasing power of their wealth against what’s coming?

Jim highly recommends precious metals and other commodities as an important part of the solution. As an overall index, commodities are the cheapest they’ve ever been vs the general stock market in over half a century:

Like many of the previous guest experts on our program, Jim maintains the near-term environment will be one of the most challenging times to invest in our lives.

Additionally, as RT reports, while the coronavirus outbreak triggered the deepest crisis in decades, “overreacting” politicians have only exacerbated the situation, Rogers said.

“This is probably the worst [crisis] that I have seen in my lifetime, because everything collapsed and you had politicians and media and everybody overreacting in my view, and everybody closed down,” he told the 12th annual ‘Russia Calling’ Investment Forum in Moscow, when asked if he sees any parallels with previous financial crises.

Which is why now, more than ever, is the time to partner with a financial advisor who understands the risks in play, can craft an appropriate portfolio strategy for you given your needs, and apply sound risk management protection where appropriate:

Anyone interested in scheduling a free consultation and portfolio review with Mike Preston and John Llodra and their team at New Harbor Financial can do so by clicking here.