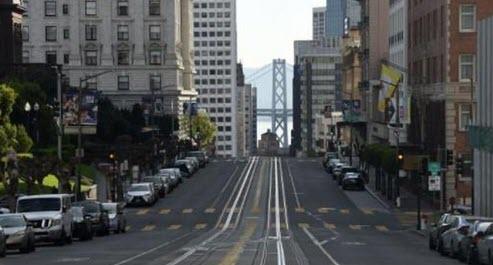 
San Francisco has managed to curb the virus slightly in its city – but at what cost? Those paying sky high taxes to live in the Bay Area may soon be wondering why they are paying to live in a shut down city that state and local government officials have refused to allow to reopen due to a virus with a CDC-predicted infection fatality rate of between 0.00002 and 0.093.

The entire downtown area of the city, once vibrant with business and tourism, is now “empty” according to a new report by AP. Everything from food trucks to local workers used to be sights one would see on a daily basis in San Francisco. Now, the city has been all but abandoned.

Even the tech giants that San Francisco is known for have left the city, in favor of working remotely from elsewhere. Families have moved out of the city in favor of the suburbs. Rents in the city are crashing, as we highlighted about a month ago. Tourists, once part of the lifeblood of the city, are now “scarce”.

This past week, part of the city re-opened as a result of virus numbers slowing. We’re sure it won’t be long until case numbers freak out elected officials heading into the winter, however, and everything is once again put into draconian “the government knows what’s best for you”-style lockdown.

San Francisco first announced its residents should stay at home in March, leading to just 12,200 virus cases and 145 deaths among 900,000 residents since then. It is one of the lowest death rates in the country. Long Beach, which is about half the size, has had about 900 more cases and 100 more deaths.

But at the same time, the city has been crippled, with many residents leaving. And many are unsure whether or not the slight re-opening will do much to re-populate the city.

One tech executive, who moved out of his $4,000/month apartment last week, told AP: “San Francisco can say, ‘Hey, it’s cool to open back up.’ But what’s changed? The virus is still there, and there’s no vaccine.” He said of the move with his partner: “We’re both extreme extroverts, so the working from home thing makes us miserable.”

They packed up their things and drove to an Airbnb in San Diego, instead, and are planning on making trips around the country.

30 year old Deme Peterson, another former San Francisco resident, said: “The spark of living in the city just kind of burned out a bit with everything being closed. We kind of didn’t see when it would come back to normal.”

Many restaurants in the city have already closed permanently. Many others are on the brink.

Coldwell Banker realtor Nick Chen commented: “San Francisco rents have been really inflated over the past couple years. It will come back, but I think the question is: Will it come back to the level it was at previously? Maybe not.”

City historian and author Gary Kamiya concluded: “I don’t know if it’s an exodus, but a lot of people are leaving.”