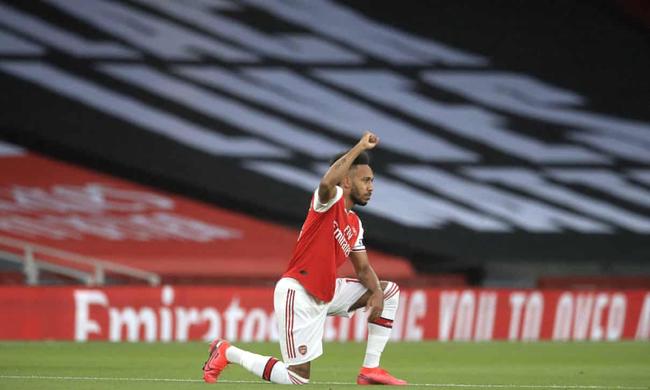 
As American sports teams embrace the Marxism uber alles cause underlying the “Black Lives Matter” mantra spewed by every virtue-signaling celebrity and white liberal in the hopes of reaching further acceptance into whichever tribe of social media narcissists are ‘trending’ this week, the English Premier League has dared to drop its support for BLM (with capital letters).

As The Guardian reports,  Premier League footballers are to continue their support for anti-racism on the pitch but will no longer be associated with Black Lives Matter.

Policies supported by the organisation of the same name, including the defunding of police forces, subsequently proved uncomfortable for the league. The chief executive, Richard Masters, was forced to justify the endorsement in front of a DCMS select committee and told MPs:

“We’re drawing a clear distinction between a moral cause and a political movement.”

Former Stoke City player Karl Henry distanced himself from the movement after the league restarted in June, tweeting:

“I think the majority of the UK have now had enough of that organisation.

“A new inclusive and politically-neutral anti-racism movement to follow and get behind is much needed. Black people’s lives matter!”

I think the majority of the UK have now had enough of that organisation.

A new inclusive and politically-neutral anti-racism movement to follow and get behind is much needed.

The divisive #BlackLivesMatter organisation, however, DOES NOT! https://t.co/ekdjfvw5Dx

Conservative MP Ben Bradley had also called on the Premier League to remove BLM from shirts, saying that the movement was sowing division over the issue of racism.

No Room for Racism is a campaign run by the Premier League with the support of other English footballing bodies and the anti-discrimination group Kick It Out. Launched in 2019, its aim is to eliminate racial discrimination from the sport both in stadiums and online.

“Discrimination in any form, anywhere, is wholly unacceptable and No Room For Racism makes our zero-tolerance stance clear,” Masters said.

“We will not stand still on this important issue and we will continue to work with our clubs, players and partners to address all prejudiced behaviour.”

We wonder how long before the NFL, NBA, MLB, etc… are brave enough to shrug off the capitalized “Black Lives Matter” movement’s now somewhat tyrannical control over who is worthy or not, and instead address the ‘black lives matter’ pursuit of ending racism in general – something we suspect many more Americans will be more comfortable embracing.