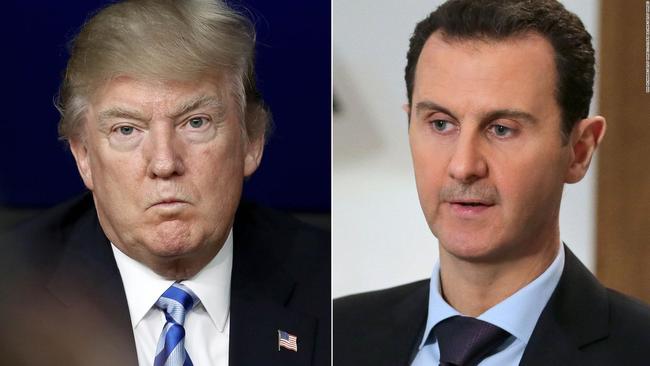 
In an extremely rare, if not absolutely unprecedented confession from a sitting American president, Trump stunned a news panel on Tuesday morning in saying he wanted to assassinate President Bashar al-Assad of Syria.

“I would’ve rather taken [Assad] out. I had it all set. Mattis didn’t want to do it,” Trump said in a wide-ranging interview with Fox & Friends.

“I would have rather taken him out” — Trump says he wanted to assassinate Bashar al-Assad, but Mattis stopped him pic.twitter.com/pUcFTSW2w9

The question has persisted over the past years of war in Syria after Bob Woodward first reported in 2018 that Trump was pursuing it.

At the time Trump had vehemently denied it: “No, that was never even contemplated, nor would it be contemplated and it should not have been written about in the book,” he had previously stated.

But Trump casually described Tuesday that in fact he was seriously considering it, only to be stopped by his Secretary of Defense at the time, Marine general Jim Mattis, which Trump added “was a highly overrated general”.

The Fox hosts quickly followed by asking whether Trump “regretted” not taking out Assad. Trump responded:

“No, I don’t regret that. I could have lived either way with that. I considered [Assad] certainly not a good person. But I had a shot to take him out if I wanted but Mattis was against it.”

The real quote from Woodward’s book regarding #Syria ‘s Assad is that @realDonaldTrump told Mattis:

However, considering the Russian military has been deeply entrenched in Syria since 2015, and as Putin vowed not to allow the West to complete its push for regime change, we wonder how exactly Trump “had a shot to take him out”.

Recall that Trump has bombed Syria on two occasions after allegations Assad used chemical weapons, with the 2018 attack involving over 100 tomahawk cruise missiles on Damascus. During the first instance, in April 2017, his daughter Ivanka reportedly influenced the decision.

NBC reported in April 2017: Donald Trump’s decision to bomb Syria was influenced by his daughter, Ivanka, being “heartbroken and outraged” at the country’s alleged chemical weapons attack, one of the president’s sons told a British newspaper.

Interesting that Trump wanted to assassinate Assad only to be advised against it and then reach out directly to Assad a few years later to discuss Austin Tice only to be rebuffed by the Syrian leader, crazy politics.

She reportedly showed her father pictures of suffering children while making the plea. Trump’s Syria policy has since then been all over the map – on the one hand he’s consistently voiced a desire to “bring the troops home” while more recently touting that “we’re securing the oil”.