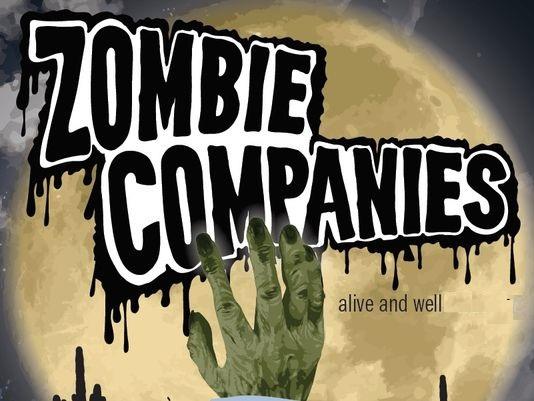 In Germany, one of the few European economies that has weathered the virus crisis reasonably well, an estimated 550,000 firms – roughly one-sixth of the total – could already be classified as “zombies”, according to research by the credit agency Creditreform. It’s a similar story in Switzerland.

Zombie firms are over-leveraged, high-risk companies with a business model that is not remotely self-sustaining, since they need to constantly raise fresh money from new creditors to pay off existing creditors. According to the Bank for International Settlements’ definition, they are unable to cover debt servicing costs with their EBIT (earnings before interest and taxes) over an extended period.

The number of zombie companies has been rising across Europe and the Anglosphere – due to of two main factors:

A Bank of America report from July posits that the UK accounts for a staggering one third of all zombie companies in Europe. They represent 20% of all companies in the U.K, up four percentage points since March, according to a new paper by the conservative think tank Onward. In the two hardest-hit sectors — accommodation and food services, and arts, entertainment and recreation — the proportion of zombie firms has soared by 9 and 11 percentage points respectively, to 23% and 26%.

The number of zombie firms has shot up as companies have taken on huge volumes of fresh debt merely to weather the virus crisis while, in many cases, generating a lot less in revenues. Across the globe, non-investment grade companies issued $322 billion in the first eight months of this year — as much as in the whole of 2019, according to BIS data. At the same time, companies that were already zombies, instead of entering bankruptcy and having their debts restructured, have been bailed out by government and/or the central bank.

For their part, smaller companies have also taken on more bank loans, largely or completely backed by government. Many firms, particularly in the sectors most affected by the crisis, have lower revenues and weaker cash flow. As a result, the borrowed cash gets used up quickly but the debt remains. If they weren’t zombies before the Pandemic, they’ll be zombies going forward.

What is to be done with all these zombies? That’s the question many are now asking. The report by Onward proposes a cunning plan (in the Baldrick vein) — called New Start — that would convert any coronavirus debt that can’t be paid back into an income contingent loan collected as a share of trading profits. The debt would come due only when a company begins turning a profit.

“The New Start scheme gives the option to intelligently delay repayments only for those firms who need it,” says the study’s author Angus Groom. “This can be rolled out as a scheme managed by HM Treasury and implemented and controlled by banks — all the while maximizing taxpayer value for loans that the Government has already underwritten.”

The term “scheme” in British English in this context means “program,” but the USian meaning of “scheme” seems to be at least equally appropriate. And taxpayers will likely never see those funds again.

This is one of a number of proposals doing the rounds in Europe aimed at finding a way of keeping most, if not all, of Europe’s zombies upright, for as long as possible. They include a straight “state debt for equity” swap, which would essentially involve governments converting the emergency loans taken out by struggling companies into equity. This idea is particularly popular among senior bankers, such as Unicredit CEO Jean Paul Mustier, presumably because the unpayable coronavirus debt companies owe the banks would also be turned into equity.

“It is a win-win all around,” says City of London grandee Lord Leigh of Hurley: “Taking equity stakes in borrower-SMEs would provide those businesses with interest-free liquidity, leaving their growth potential unimpeded, whilst correspondingly giving banks the opportunity to recoup more of the money they have committed in the medium to long term.”

Former UK Chancellor George Osborne has proposed another solution: just forgive all small business coronavirus debt. As with most of the proposals, the plan is couched in terms of exclusively saving small companies. If past is prologue, it’s the larger ones — the ones that owe the banks millions or billions — they’re most interested in saving.

“None of these options are ‘uncontroversial’ and each involves varying degrees of moral hazard, taxpayer loss and engineering complexity,” says Groom. “However our solemn conclusion is that some form of action is unavoidable.”

Up to now, many — though not all — of the short-term rescue interventions by governments or central banks can be justified in some way or another, particularly if they support the unemployed and unlock credit that had frozen up even for healthy companies. But it’s quite another thing when the short-term rescue efforts become a long-term reality that helps to engender more and more new zombies as well as make preexisting zombies even bigger.