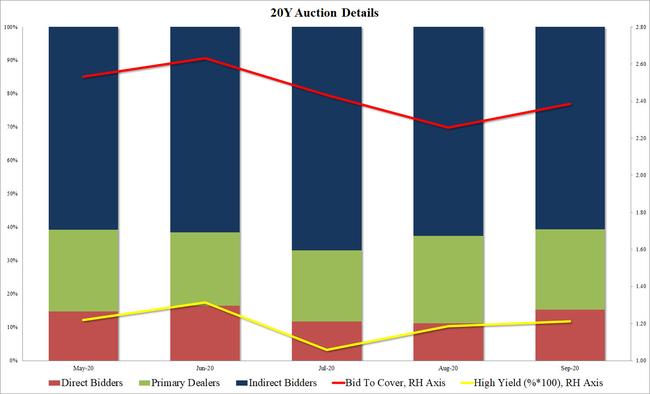 
Unlike last month, when both the 20Y and 30Y auctions were so ugly they repriced the long-end well higher for the next few weeks, last week’s stronger than expected 30Y auction hinted at continued strength in the primary market for duration, and sure enough moments ago the 20Y auction, a 19-year 11-month reopening of Cusip SQ2, was also impressively strong.

The impressive buyside demand for 20Y paper, a substantial improvement to the dismal 20Y auction last month, was enough to push 10Y yields modestly lower by half a basis point, although the move was too small to write home about.

Curiously, despite the general improvement market tone, the 10Y auction is now trading at 0.6772%, exactly where it was one month ago when a far uglier 20Y auction priced. In other words, in a time when Yield Curve Control is one sharp selloff away, Treasury auction specifics are just as irrelevant as all other fundamental data.