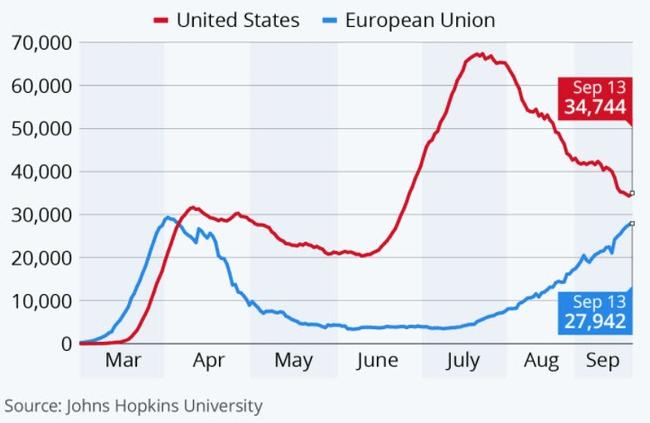 
When the European Union reopened its borders to non-members on July 1, the United States found itself on the list of countries excluded from the lifting of travel restrictions. Due to its relative failure to control the spread of COVID-19, the U.S. didn’t meet the criteria applied by the bloc’s member states, which Statista’s Felix Richter notes, also keep travelers from Russia and Brazil, among others, from entering the EU.

The European Commission had recommended the gradual reopening of EU borders for external visitors on July 1, saying that:

“international travel is key for tourism and business, and for family and friends reconnecting. While we will all have to remain careful, the time has come to make concrete preparations for lifting restrictions with countries whose health situation is similar to the EU’s.”

The Commission advised member states to keep restrictions in place “for countries whose situation is worse than in the EU,” a criterium the U.S. met at the moment.

However, as the following chart, based on data from Johns Hopkins University, illustrates, the reopening of its borders for international travel during the summer holidays has backfired for the European Union.

After successfully keeping new infections at a very low level for two months, case numbers started trending upwards in mid-July as cross-border travel facilitated the spread of the virus. Meanwhile the situation in the U.S. appears to be gradually improving, and the EU is on the verge of overtaking the United States in terms of new infections.