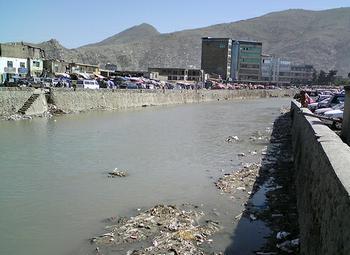 
The US state-funded Department of Defense newspaper Stars and Stripes is out with a surprising report sure to add more fuel to the fire regarding America’s nearly two-decade long occupation of Afghanistan.

The weekend report found that the US Embassy in Afghanistan as well as NATO headquarters in the country routinely dumps sewage waste into the Kabul River, which spans much of the country East-West for 430 miles.

“Raw sewage pours into the fetid waters of Kabul River each day, including some of what comes from the U.S. Embassy and the military headquarters for Resolute Support NATO,” the damning report begins.

Afghan officials say the practice endangers the health of many thousands of families, given the river is a vital resource used by villages living near it in a variety of ways.

The scandalous issue began after the main sewage treatment facility in the Afghan capital stopped working nearly two years ago, leading to mass dumping into the Kabul River.

Apparently Western occupying forces are responsible for a vast amount of sewage getting regularly dumped:

At least 21,000 gallons of raw sewage from portable toilets at the U.S. Embassy are unloaded each month at the aging Makroyan Waste Water Treatment Plant, which pipes the untreated sewage into the river, according to Afghan officials and a representative for the contractor Oryx-Afghanistan, who handles waste for the compound.

About 12,000 gallons of sewage from U.S. and coalition troops the also go into the river each month, according to Malika and Refa Environmental Solutions, which services the U.S.-led NATO headquarters in Kabul and Bagram Airfield.

However, it’s reportedly being done indirectly, through contracting companies which deliver the US and NATO waste to the derelict facility, before it gets dumped into the river.

“Since the wastewater treatment plant does not function and its canals are damaged, the sewage from Makroyan dumping site directly goes into the Kabul River,” a local Afghan waste treatment official said.

Children as well as some 3,000 families living in the direct vicinity of both the damaged treatment plant and the river have reported persistent gastrointestinal issues, including severe diarrhea.

One obvious question remains: what of the trillions of dollars Washington has sunk into the country over the course of the past two decades?

Apparently the country’s central capital doesn’t so much as have a proper sewage treatment system, which strongly suggests lack of facilities throughout the rest of Afghanistan. What has our two decade long post 9/11 war wrought?