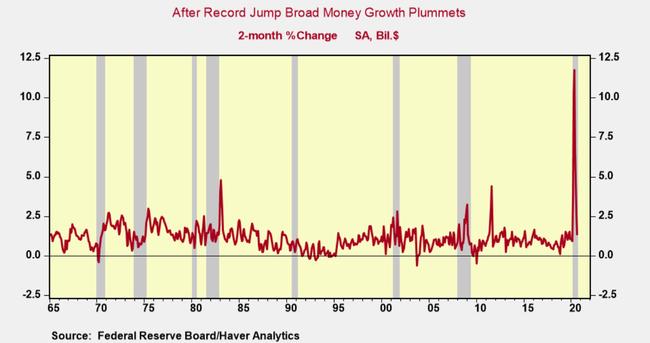 The liquidity boom fueled from record fiscal and monetary stimulus has disappeared. The unwind process will be uneven just as it was uneven on the upside when record stimulus flowed through portfolio, income, and spending channels.

Finance (equity markets) was the biggest beneficiary and it should show the earliest hit and also bear the brunt of the abrupt reversal in liquidity flows. Consumer spending will be negatively impacted in time, but some crosscurrents also help retail spending.

Policymakers unleashed record monetary stimulus through the sharp reduction in official interest rates, a large increase in asset purchases, and the creation of new lending facilities. There are many ways to measure the impact of these policy decisions but the easiest and most direct way is to monitor its impact on broad money.

The Federal Reserve is in the business of “making” money, sometimes more and sometimes less. The cumulative policy actions triggered a record increase in the growth of broad money.

According to the monetary aggregate data reported by the Federal Reserve, broad money (M2) increased by a record 13.6% in the three months ending in June. That’s nearly 3X times larger than the prior record three-month increase in broad money over the past 50 years.

Sensing the surge in liquidity (i.e., broad money) professional managers increased their exposure to equities. Excess liquidity had to go somewhere was the argument. That trade was aided by the plunge in the liquidity needs of the general economy. In Q2, nominal GDP declined a record of 9.6%.

That backdrop, record surge in broad money and decline in nominal spending, proved to be very favorable for finance. Equity markets surged, increasing more than 50%, hitting record levels in the process.

However, that process is reversing. That is, nominal spending is on the rebound while broad money growth is slowing, creating a “liquidity” squeeze or shortfall for finance.

According to the GDPNow estimates by the Federal Reserve Bank of Atlanta, Q3 GDP is expanding over 7%. However, broad money is running less than 1.5% so far in Q3. The liquidity slowdown is amplified by three consecutive monthly declines in commercial bank credit (bank loans to business, real estate, and consumer).

The sudden deceleration in broad money (and credit) has to mean something (negative) for finance since it was big positive on the way up. The high-flying tech stocks have to be the most vulnerable to a shortfall in liquidity as they benefitted the most.

Record fiscal stimulus was another driver of the liquidity boom. According to the Bureau of Economic Analysis (BEA), special federal payments to individuals and small businesses (proprietors) in Q2 boosted personal income by $ 3.2 trillion annualized.

The record stimulus ran out at the end of July. The Trump Administration through executive orders did authorize a $300 weekly jobless benefit extension. With more than $30 billion of the $44 billion already distributed, the administration is beginning to cut off the states that were providing the additional unemployment benefit.

Consumer liquidity was boosted by $750 billion a month from April through July. By the end of September, that figure will be reduced to zero.

Consumer spending will be hurt by the abrupt removal of liquidity. But the fallout will not be visible immediately and also not like one would expect.

The first sign of a consumer spending pullback is usually seen in weaker retail sales. But the pandemic has altered spending patterns curtailing spending on travel, entertainment, and recreation and increasing the dollars spent at retail.

The fallout in retail spending is likely to be a fourth-quarter event. Failure by Congress to provide additional financial support to people will hurt as would a correction in the equity market emanating from the reversal in liquidity flows.