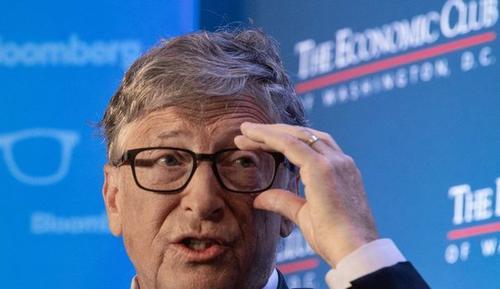 
Bill Gates just ratcheted up his PR campaign to sow doubts about President Trump’s alleged ‘political meddling’ with the FDA, while also placing him in league – if only temporarily – with the vaccine skeptics Gates frequently rails against. During an interview with Bloomberg News, the Microsoft founder and Gates Foundation chairman, who has persisted in his defenses of the WHO despite growing evidence of missteps, attacked the FDA’s credibility, claiming that he no longer believes the FDA is ‘the world’s premier public-health authority’, as Bloomberg says during the opening paragraph of the post.

Gates, who has helped finance several vaccine projects around the world, said he doesn’t trust the CDC, either, because credibility and a focus public welfare have become “casualties of a presidency that has downplayed or dismissed science and medicine in the pursuit of political gain.”

He cited FDA chief Stephen Hahn’s decision to “backtrack” on the agency’s statement on convalescent plasma to back up his claims.

“We saw with the completely bungled plasma statements that when you start pressuring people to say optimistic things, they go completely off the rails. The FDA lost a lot of credibility there,” Gates, the billionaire philanthropist, said in an interview on Bloomberg Television. “Historically, just like the CDC was viewed as the best in the world, the FDA had that same reputation as a top-notch regulator,” Gates said. “But there’s been some cracks with some of the things they’ve said at the commissioner level.”

While he said he applauds the Trump Administration’s “Project Warp Speed”, which has put up billions of dollars for private partnerships and pharmaceutical companies to fund trials and research, Gates is taking issue with the lack of funding for “manufacturing and procurement” – ie building out permanent supply chains for medicines and vaccines – in the developed world.

Hmm…if only somebody had thought of that…

Anyway, by spending another $8 to $10 billion – peanuts in the grand scheme of things, where Democrat are pushing to dump trillions more in fiscal stimulus – the US government could save “trillions” in lost economic output, Gates insists.

“The inequity of this – whether it’s between citizens in the country, blue collar versus white collar, blacks experiencing a higher sickness rate than others – poor countries can’t borrow money and spend money like the U.S. and other rich countries have,” Gates said. “Almost every dimension of inequity has been accentuated here.”

Asked about his newfound status as a “polarizing figure” in the pandemic era, Gates insisted that “conspiracy theories” circulating about him on social media are “crazy” – and that social media companies are to blame for the reputational damage he has endured.

To sum up: Gates doesn’t think you should trust bureaucratic institutions (which, by extension, includes Dr. Fauci and Dr. Birx) anymore. Just trust him.

Watch the interview below: