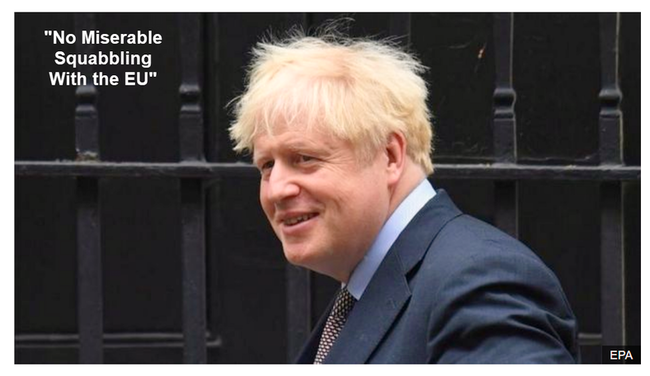 The UK is threatening to ignore the Brexit Withdrawal Agreement. How did we get here?

Boris Johnson has urged Conservative MPs to back his Plan to Override Part of the Brexit Withdrawal Agreement.

In a Zoom call with about 250 of them, he said the party must not return to “miserable squabbling” over Europe.

The EU has warned the UK it could face legal action if it does not ditch controversial elements of the Internal Market Bill by the end of the month.

And a Tory MP has proposed an amendment to the bill, which would affect trade between Britain and Northern Ireland.

Meanwhile, the European Parliament has threatened to scupper any UK-EU trade deal if the bill becomes UK law.

German Finance Minister Olaf Scholz was out with another EU bluff on Saturday: No-Deal Brexit Would Hurt Britain More Than EU.

“My assessment is that an unregulated situation would have very significant consequences for the British economy,” Scholz told a news conference after a meeting of EU finance ministers in Berlin.

“Europe would be able to deal with it and there would be no particularly serious consequences after the preparations we have already made,” he added.

Prime Minister Boris Johnson said on Saturday that a planned bill, which would breach a divorce treaty with the bloc, was needed to protect Britain’s integrity.

If “Europe could deal with this with no serious consequences”, then why would it care?

The fact of the matter is German exports to the UK would crash in the absence of a deal.

But how did we get to this point?

EU Made a Power Grab and the UK Responded in Kind

Eurointelligence fills in the missing pieces of the puzzle.

Our twitter feed exploded yesterday after the UK’s Northern Ireland Secretary admitted that the no-deal legislation constituted a breach of international law, in a very specific and limited way, as the minister put it. The anticipated breach of law relates to Northern Ireland: Under the withdrawal agreement, the region would continue to have custom-free links to the Republic, while new customs borders would have to be erected along the Irish Sea. The legislation seeks to nullify this arrangement in the event of no deal. Readers may recall this was the single biggest controversy in the withdrawal agreement negotiations.

It is worth reflecting on how we got to this point. The moment the EU tried to make a power grab for UK state-aid policy, the negotiation turned into an ugly battle of egos.

We heard a lot of tough-luck arguments. The EU is the bigger of the two sides, and can impose its will, for example by anchoring the level-playing-field to its own conditions. This was a short-sighted argument.

The International Court of Justice in the Hague may well end up ruling against the UK. But, first, this won’t happen before the end of the year. And, second, the ICJ has no enforcement powers. If you start playing the relationship talks in the spirit of a geopolitical power game, don’t be surprised when the other side plays in the same spirit.

We are here because the EU demanded fishing rights and interfered in UK internal policies on state aid.

If the EU will not compromise, the EU will shoot itself in the foot and Germany in the head.