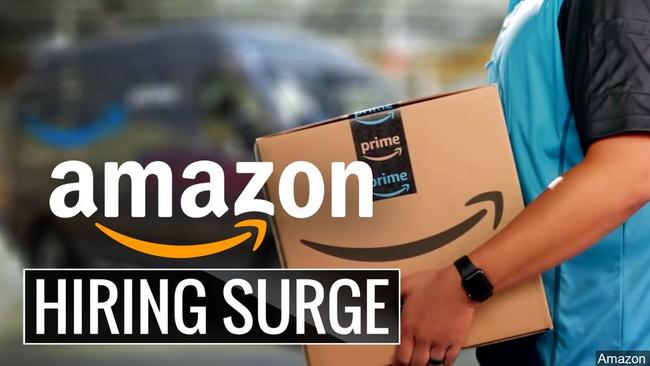 
Amazon announced on Monday that its planning to hire 100,000 new employees in the US and Canada on top of the 33,000 corporate new hires it announced last week.

The new jobs start at $15 per hour, and in certain metro areas, Amazon is offering $1,000 bonuses for new recruits. The hiring spree comes as the Seattle-based e-commerce giant is opening 100 new operation centers in September. Some of these vast new depots will include fulfillment centers, delivery stations, sorting centers, and other sites, the company said in the release.

“We are opening 100 buildings this month alone across new fulfillment and sortation centers, delivery stations, and other sites.

“We are proud to be hiring 100,000 new associates with pay of $15 per hour or more across those buildings and in our network. Our expansion also comes with an unwavering commitment to safety. Collectively, our new team members have already completed more than 1,200,000 hours of safety training, with over 500,000 more hours expected, to ensure that in addition to fast and efficient delivery for our customers, we’re providing a safe and modern environment for our employees and partners,” said Dave Clark, Senior Vice President of Worldwide Operations at Amazon.

Amazon already hired 100,000 people in March, as the company struggled to cope with a surge in online orders due to virus-related lockdowns, and last week it added 33,000 new corporate and technology jobs. Though it has also announced selective cuts to contract delivery drivers and other jobs, cuts that stoked outrage given the performance of the company’s stock since the start of the pandemic.

With virus cases surging, remote working flourishing, and e-commerce booming – along with the death of small and medium-sized  firms – tech giants like Amazon are gobbling up market share and seizing the opportunity to cement their dominance and newfound market share during a year that has been a massive boon for its business.

Amazon’s staggering stock price surge this year has likely been justified by its latest quarterly earnings report, which smashed earnings expectations but also reported net sales for the second quarter that beat the highest analyst estimate.

A booming Amazon has consequences. This will undoubtedly continue to pressure small and medium-sized brick-and-mortar shops into more closures and forced layoffs.