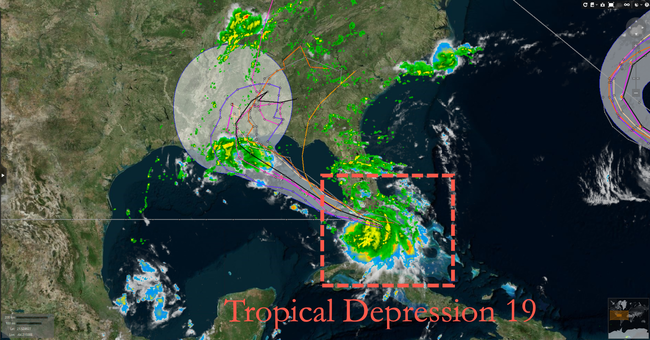 
Days ago, we outlined the National Hurricane Center (NHC) is tracking seven systems in the Atlantic basin. At least one of those systems, now called Tropical Depression 19, is dumping heavy rain and producing gusty winds for parts of South Florida Saturday. The system is set to intensify early next week as it will traverse the Gulf of Mexico.

As soon as Saturday evening, Tropical Depression 19 could be a named storm, likely called “Sally.”

“The depression is forecast to strengthen to a hurricane early next week as it moves across the northeastern Gulf of Mexico, and there is an increasing risk of life-threatening storm surge and dangerous hurricane-force winds from southeastern Louisiana to the Alabama coast,” according to the NHC.

Several spaghetti models suggest the system will move into the northern Gulf Coast region and make landfall somewhere between Lousiana and the Florida Panhandle around Tuesday-Wednesday. Models are not exact and could change in the coming days.

CNN forecasts widespread rainfall could be seen from New Orleans to Panama City by Thursday of next week.

Readers may recall the 2020 hurricane season has already seen 17 named storms. The average for this time of year is around 12. The reason for a super active hurricane season is due to La Nina, which formed in August.

Four other systems are currently swirling in the Atlantic basin.

As Democrats and liberal mainstream media blame climate change for the latest string of volatile weather across the U.S. – maybe the finger should be pointed at La Nina.

What are crypto payment gateways and how do they work?