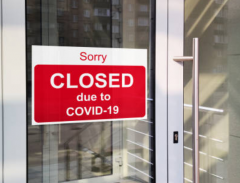 In the early days of the coronavirus crisis, the rationale given for lockdowns was that it was necessary to stay at home for “fifteen days to slow the spread.” The idea was that social distancing was necessary so that hospitals and other healthcare resources would not be overwhelmed.

However, by the summer of 2020, whether by design or not, it became common to hear media pundits, politicians, and even some scientists either imply or outright claim that social distancing could permanently flatten the curve or otherwise somehow cause a drastic reduction in overall covid-19 deaths.

For example, The Hill’s Reid Wilson claimed in July: “We know how to stop this virus, it requires social distancing, it requires wearing a mask, and constant hand sanitizers and staying home as much as possible.”

Yet this displays a woeful lack of understanding about the purpose and effectiveness of lockdowns.

Lockdowns of the sort seen in April and May in this country do nothing at all to “stop this virus.”

The lockdown strategy only works to completely stop a disease if certain conditions can be met. Specifically, the lockdown must be extremely strict,  and it must be maintained indefinitely—perhaps for years—until a safe and effective vaccine is widely available.

Clearly, the US is nowhere near enforcing a lockdown like this, nor does it appear that a vaccine—certainly not a well-tested one—is imminent. Thus, given that we know lockdowns themselves cause deaths through suicides, drug overdoses, and more, trying to impose a strict lockdown until that day comes would be a high-stakes gamble few will be willing or able to endure.

For some insightful observers, this has been clear from the very beginning. Writing back in April of this year, Joseph Ladapo, a professor of medicine at UCLA, wrote:

There is no guarantee of a vaccine within the next 18 months. We have taken measures to slow the virus, but these can’t stop it. The only thing that can stop the virus at this advanced stage of community transmission is a complete lockdown, which can happen in authoritarian countries like China, but not in the U.S.

Are shutdowns enough? No. Despite the efforts, there is still enough human contact to ensure the virus will spread. Take a look at the long list of “essential” services and exemptions on California’s Covid-19 website, for example. Shutdowns will cause the virus to spread more slowly, but it will spread nonetheless.

When shutdowns end, the virus will spread and Covid-19 deaths will increase. Without a vaccine and community immunity—often called “herd immunity”—this outcome is all but guaranteed. The only thing that will temporarily quell it in the near term, short of a miracle treatment, is another shutdown. But states will get only one pass at this. Once lifted, the appetite for a repeat shutdown will be tepid at best, even in left-leaning states. The reality of the shutdown’s costs—the upheaval caused by school closures, economic hurt, social isolation and lost lives and livelihoods—will be fresh. Some argue that stopping Covid-19 and protecting the economy are one and the same. Although this is true, it is too late to do either.

Not even the most enthusiastic supporters of draconian lockdowns, including Neil Ferguson, author of the infamous (and very wrong) Imperial College model, thought it possible to eradicate the disease through lockdowns. The Imperial report refers to lockdowns simply as a method of “temporary suppression.”

As Ladapo notes, at this stage in the game, i too late to contain the disease without a total lockdown where so much as a trip to the grocery store is verboten. Moreover, international borders would have to be sealed shut to prevent infected populations from entering the country. Given the success with which governments have controlled the flow of migrants, we can guess about how successful that strategy would be.

When we add all this together, given current realities, social distancing and lockdowns cannot possibly serve any purpose other than to slow down the spread so as to lessen the burden on healthcare facilities. The only lives saved would be those who would otherwise have been denied medical care by an overwhelmed medical system. But this is a relatively small number, and in the developed world medical systems are now nowhere near running out of beds.

Thus, another round of stay-at-home orders or lockdowns certainly won’t make the disease go away. They’ll just delay the spread to a future date. Moreover, it’s debatable how effective lockdowns are at accomplishing even this. In a new working paper for the National Bureau of Economic Research (NBER), Andrew Atkeson, Karen Kopecky, and Tao Zha conclude that we may be even past the time when lockdowns make much of a difference to outcomes.

It appears countries and regions follow a similar pattern “everywhere.” Transmission rates are high at first, the study notes, but growth in the spread of the disease quickly declines after twenty to thirty days. After this, “the growth rate of daily deaths in all regions has hovered around zero or slightly below.” This is regardless of whether or not there are social distancing laws or mask mandates. In other words, it doesn’t look like lockdowns (which now vary widely in their extent and severity) are even changing the shape of the curve anymore.

Thus, a few months out from the initial surge, growth rates in all regions became more and more similar across jurisdictions. The authors therefore conclude:

given the observation that disease transmission rates have remained low with relatively low dispersion across locations worldwide for the past several months as NPIs [nonpharmaceutical interventions] have been lifted, we are concerned that estimates of the effectiveness of NPIs in reducing disease transmission from the earlier period may not be relevant for forecasting the impact of the relaxation of those NPIs in the current period, due to some unobserved switch in regime.

In other words, not only are we well past the time when lockdowns might have flattened the initial surge in transmissions, at this point in the pandemic it doesn’t look like lockdowns would even do much to flatten the curve to the point that we’re better off.

Dogmatic advocates for lockdowns are likely to continue pushing for open-ended mandates until a vaccine is widely available. But they’re gambling with people’s lives.

How many children must be impoverished and how many jobless men and women must die by suicide or drug overdoses in the meantime?

Every day of a lockdown puts more lives in danger.