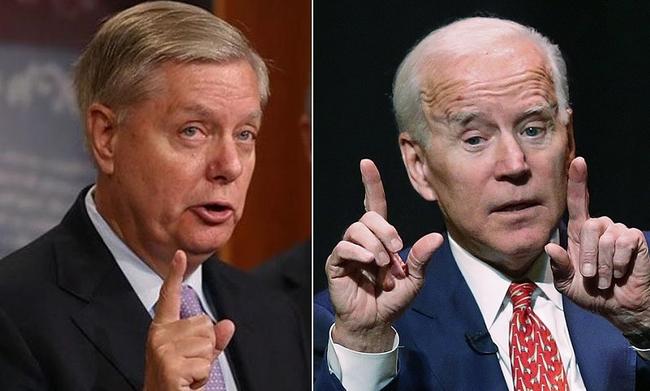 
Senator Lindsey Graham (R-SC) has sounded the alarm following a Fox News report that ActBlue – a leftist nonprofit political action committee (PAC) which has donated $194 million to the Biden campaign – took in nearly half its 2019 donations from anonymous donors who listed themselves as ‘unemployed.’

I urge the @FEC and others to investigate this situation. Is money being laundered through @ActBlue from straw donors or foreign governments to Democratic candidates, or is this legit? Somebody needs to find out ASAP.

A  preliminary computer analysis by the Take Back Action Fund, obtained exclusively by Fox News, has found that nearly half of all 2019 donations to ActBlue were made by people claiming to be unemployed.

According to the findings of the Action Fund – a nonprofit that aims to “educate the public on conservative solutions for political reform” – 48.4% of ActBlue donations last year, prior to the massive loss of jobs that came with the onslaught of the coronavirus pandemic, came from those who did not list an employer or who claimed to be unemployed. –Fox News

“After downloading hundreds of millions of [dollars in] donations to the Take Back Action Fund servers, we were shocked to see that almost half of the donations to ActBlue in 2019 claimed to be unemployed individuals,” said John Pudner, president of conservative political group, Action Fund. “The name of employers must be disclosed when making political donations, but more than 4.7 million donations came from people who claimed they did not have an employer. Those 4.7 million donations totaled $346 million ActBlue raised and sent to liberal causes.“

“It is hard to believe that at a time when the U.S. unemployment rate was less than 4 percent, that unemployed people had $346 million dollars to send to ActBlue for liberal causes,” Pudner continued, adding that “4.7 million donations from people without a job … raised serious concerns.”

Notably, by mid-June, ActBlue had contributed $119,253,857 to Biden – a figure which remained unchanged until at least July. As of this writing, they have contributed $194 million – an increase of $75 million.

So when Biden’s campaign bragged about raising $364.5 million in August, somewhere in the vicinity of 20% came from ActBlue – which took in 4.7 million anonymous donations last year from unemployed individuals, totaling $346 million.

Meanwhile, Action Fund also found that in 2020, ActBlue showed an uptick in anonymous donations from ‘unemployed’ people to 50.1% of contributions between January and August.

ActBlue claims that much of the money comes from retirees and people such as homemakers who aren’t technically counted as unemployed.

Launched in 2004 as a “powerful online fundraising platform available to Democratic candidates and committees, progressive organizations, and nonprofits,” ActBlue critics – including Action Fund – contend that their website allows unverified credit card donations from anyone, in any country, without a paper trail.

“ActBlue’s insistence on refusing to allow banks to verify their donations is an invitation to foreign programmers or others to send money through them using fake American names, and we encourage them to start letting banks verify the identity of donors to stop the potential for millions of dollars to influence our election,” said Pudner.

Also notable is that Republican fundraising platform WinRed brought in 4.9 million donations, totaling $302 million – just 4% of which came from people who didn’t list an employer or were unemployed, or 5.7% of donations.

“We purposely wanted to examine 2019 first, because, before COVID-19, the unemployment rate was at 4 percent or below. It’s hard to believe that millions of Americans who were out of work had $346 million to spare to give to ActBlue for liberal causes,” said Pudner, adding “Auditing these suspect donations to determine if millions lied by indicating they were unemployed when in fact they were not, or if their names were just being used by a foreign programmer or someone else to move money without their knowledge, will take time.

Read the rest of the report, including ActBlue’s response to Fox News, here.