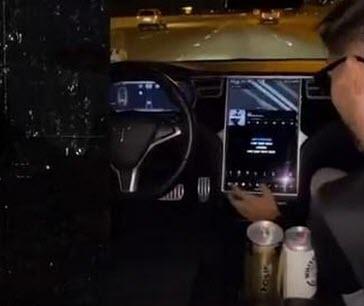 
Stunning, but sadly no longer surprising video was posted on Tik Tok this week of what appears to be three 20 something guys, indulging in alcoholic beverages while their Tesla – with no one in the driver’s seat – barrels down the highway.

It is the latest thumbing of the nose to the NHSTA, who has repeatedly failed to meaningfully address how Tesla’s Autopilot has played a role in several fatal crashes across the nation.

Video shows the three passengers flying down a highway while Tesla’s Autopilot does the driving. In the interim, they are singing along to the radio drunkenly while sipping on various kinds of alcoholic beverages. In other words, they made Tesla’s Autopilot their designated drive. According to TMZ, who posted the video, the car was moving at 60 mph.

They then took video of the incident and posted it to TikTok.

Recall, just days ago we documented the horrifying aftermath of a Tesla that veered out of control in Nanchong City, China, leaving mangled bodies strewn behind it. The video painted a disturbing scene, showing what appear to be lifeless bodies on the street in the aftermath of the event.

And back in July, a Tesla on Autopilot smashed into the back of a patrol vehicle on the side of the road near Benson, Arizona.

You can watch video of the geniuses at work here: