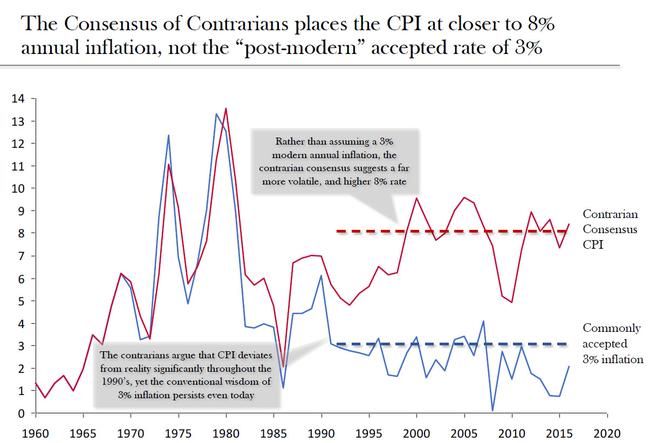 
One of the biggest overhauls in monetary policy in recent years was the Fed’s announcement at the end of August that the US central bank would target average inflation going forward (without however giving any specifics – what is the target inflation rate? what is the lookback period for calculating the “average” – 1 year, 5 years, 50?). To many this was nothing more than a strawman designed to give the Fed leeway to not hike rates (and thus crush bond and stock prices) even if inflation runs away in the coming years (as a reminder the biggest debate in modern finance is what comes after the covid pandemic, inflation or deflation, with prominent financial gurus on either side of the debate).

Instead, as we have often written and as increasingly more mainstream commentators now agree, a far more necessary debate the Fed should hold is how inflation is measured for the simple reason that starting in the 1980s, the calculation of inflation as measured by either the CPI or PCE became political, and meant to give Congress the capacity to continue spending without a “budget constraint.” For more see the following articles:

Now, none other than a Harvard Professor has emerged on our side of this debate, arguing that the true cost of living is far higher than the laughable official CPI print of 1.3% would have the public believe.

In an NBER paper titled “Inflation with Covid Consumption Baskets“, professor Albert Cavallo calculates that the true inflation rate for Covid-connected purchases is 1.85%, more than 40% higher than the Consumer Price Index. Cavallo writes that “the Covid-19 Pandemic has led to changes in consumer expenditure patterns that can introduce significant bias in the measurement of  inflation.” Using data  collected from credit and debit transactions  in  the US to update the official basket weights and estimate  the  impact  on  the Consumer Price Index, Cavallo finds that “the Covid inflation rate is higher than the official CPI in the US, for both headline and core indices. I also find similar results with Covid baskets in 10 out of 16 additional  countries.”

If it sounds as if it is politically convenient for most developed countries – not just the US – to mask the true level of their runaway inflation, it’s because it is. After all, how many nations would task their central banks to hike rates and crash their stock markets just because it makes the cost of living of some 90% of the population increasingly unbearable.

Not surprisingly, the Harvard professor also shows that low-income households are experiencing more inflation, compared to high-income households, simply because spending on non-core products which act more as a tax on consumers, and whose prices have been surging, represents a far greater percentage of the monthly paycheck low-income consumers take home each month.

As Cavallo concludes, the  difference between the measured and reported inflation “is significant and growing over time, as social-distancing rules and behaviors are making consumers spend relatively more on food and other categories with rising inflation, and  relatively less on transportation and other categories experiencing significant deflation.”

This is not Cavallo’s first foray into true inflation tracking. Back in 2008, he co-founded The Billion Prices Project, an academic initiative at Harvard and MIT that pioneered the use of online data to conduct research on high-frequency price dynamics and inflation measurement. It found that official CPI data consistently undercounted increases in the true cost of living. He also created Inflacion Verdadera to measure the real inflation rate in Argentina and Venezuela and co-founded two private companies

One doesn’t need to read Caravllo’s work to know that inflation is already out of control in several “core” products: last week, distortions from the official CPI report could be seen in used-car pricing, which showed the biggest monthly jump in August since 1969, but are still far short of the increases seen by used-car auctioneer, Manheim, an Atlanta-based firm that sells roughly 7 million vehicles a year according to Bloomberg.

“The jump in used car and truck prices over the past two months might reflect the increased demand from city-dwellers who no longer are comfortable taking mass transit and others who have left the city and now need a vehicle,” said Kathy Bostjancic, economist at Oxford economics.

Whatever the reason for the persistent increase in various Covid-impacted categories, the debate over just what it is that the CPI measures – because it sure as heck isn’t changes to the true cost of living for most Americans – remain.

And while we doubt that the Fed – or Congress – will ever do anything to figure out what real inflation is for what little is left of the US middle class, we remind readers that according to must read report from Devonshire Research Group published in 2017…

Devonshire’s summary observations were the following:

Considering that the Fed would have to hike aggressively even under its new AIT mandate, don’t expect anyone in authority to seriously discuss this all too critical subject for most Americans whose purchasing power is being destroyed with every passing day and not a single person in authority seems to care.

The full Devonshire Research report on true inflation is below: