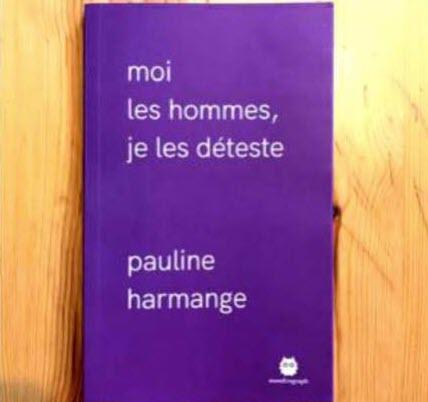 Many European nations like Germany have struggled for years to suppress speech only to fuel movements like neo-Nazis who operate underground or evade limits. Now France has given another example of why speech regulations often fail.

The effort to ban the book “Men, I hate them” by Pauline Harmange has backfired with increased sales from defiant citizens.

Ralph Zurmély, an adviser to France’s ministry on gender equality, declared the book to be an “ode to misandry.” It is certainly entitled like such an ode but the proper response is to denounce such work not seek to ban it or punish its author.

Zurmély cited the broad French laws criminalizing any speech or writing that “incites hatred.” The publishers were warned in a letter that “incitement to hatred on the grounds of gender is a criminal offense.” The move immediately sent sales through the roof and the book sold out.

These laws are based on ill-defined and fluid terms that have led to broader and broader application as groups and individuals seek to silence others with opposing views.

For example, fashion designer John Galliano has been found guilty in a French court on charges of making anti-Semitic comments against at least three people in a Paris bar. At his sentencing, Judge Anne Marie Sauteraud read out a list of the bad words used by Galliano to Geraldine Bloch and Philippe Virgitti. “He said ‘dirty whore’ at least a thousand times,” she explained in court.

In another case, the father of French conservative presidential candidate Marine Le Pen was fined because he had called people from the Roma minority “smelly”.

A French mother was prosecuted because her son went to school with a shirt reading “I am a bomb.”

As I have previously discussed, there is a sad irony of France leading efforts to curb free speech. Once the bastion of liberty, France has now become one of the greatest international threats to free speech. In the end, such laws have never been successful in controlling thoughts. However, they create an insatiable appetite to control the speech of others.

This taste for regulating speech has now become evident in the United States. I recently criticized the calls of Democratic leaders like House Intelligence Committee Chairman Adam Schiff for greater censorship of the Internet and social media.

The Atlantic published an article by Harvard Law School professor Jack Goldsmith and University of Arizona law professor Andrew Keane Woods calling for Chinese style censorship of the internet.  They declared that “in the great debate of the past two decades about freedom versus control of the network, China was largely right and the United States was largely wrong” and “significant monitoring and speech control are inevitable components of a mature and flourishing internet, and governments must play a large role in these practices to ensure that the internet is compatible with society norms and values.”

There is a real likelihood that I would hate this book. However, I have a far greater fear of a ban of the book than its content.  As many on this blog know, I oppose most limits on free speech. I follow a classic view that the solution to bad speech is more and better speech.

The danger to France is not this short book with a catchy title. It is the vague criminal speech law used to threaten its author.