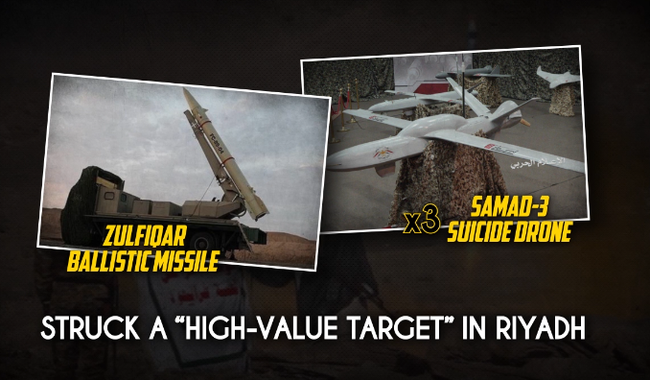 Late on September 10, the Saudi capital of Riyadh came under a missile and drone attack from the Ansar Allah movement (more widely known as the Houthis).

The Yemeni missile and air forces, loyal to the Houthi government, announced that they struck a “high-value target” in Riyadh with a Zulfiqar ballistic missile and three Samad-3 suicide drones.

“The attacks are a response to the enemy’s permanent escalation and its continuing blockade against our country,” Brig. Gen. Yahya Sari, a spokesman for the Armed Forces of the Houthi government, said in a statement promising more attacks on Saudi Arabia if the Kingdom “continues its aggression and siege” on Yemen.

The Houthis revealed the Samad-3 combat drone, which also can be used as a loitering munition, in 2019. At that time, they claimed that it has a range of up to 1,500km. As to the Zulfiqar ballistic missile, it is one of a variety of ballistic and even cruise missiles widely employed by the Houthis against Saudi-affiliated targets.

Commenting on the September 10 attack, a spokesperson for the Saudi-led coalition said that Houthi forces launched the missiles and drones at civilian targets in Saudi Arabia, without giving more details.

Every Houthi strike on a target inside Saudi Arabia is a painful blow to the Kingdom. Even without the almost lost war in Yemen, Saudi Arabia has been passing through an economic and political crisis. So, it prefers to deny any damage or casualties as a result of such attacks, simultaneously censoring and silencing reports in social media.

Earlier this week, the Houthis already conducted a series of drone strikes on Abha International Airport in the southwestern Saudi region of Asir. Strikes were delivered on the target for a three days in a row and caused material damage to the installation even according to Saudi reports. The coalition also claimed that it downed at least 2 Houthi drones.

Meanwhile, in Yemen itself, Saudi proxies continue retreating under the pressure of the Houthis and their allies in the province of Marib. Recently, Houthi forces cut off the highway between the provincial capital and an important stronghold of Saudi-backed forces, the Maas base. The expected fall of the Maas base will mark the collapse of the defense of Saudi forces in this part of the province.

For a long time, the conflict in Yemen has been a swamp for pro-Saudi forces and the Kingdom-led coalition, which even de-facto collapsed under the pressure of various obstacles and internal contradictions. So, the Saudis have been suffering from the consequences of their own actions.