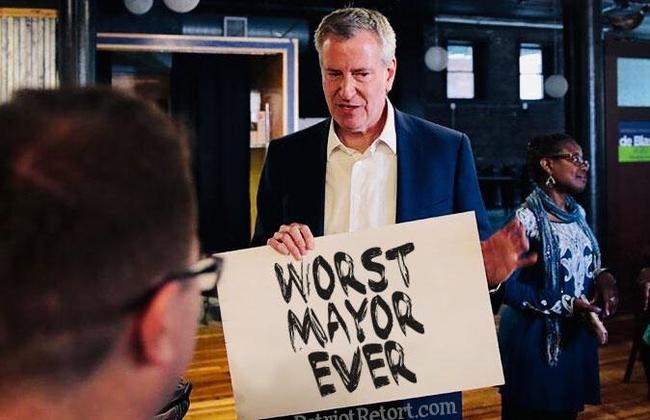 
Former NYPD Commissioner Ray Kelly says that New York City will take much longer to bounce back from Mayor Bill de Blasio’s ‘radical policies’ than from the destruction of the 9/11 attacks, according to Fox Business.

In a Friday interview with Fox Business Network‘s Neil Cavuto, Kelly – who took up the mantle as police commissioner for the second time following the 2001 terrorist attacks – remembered how “north of Canal Street [after the attacks], restaurants were open, people were living their lives in the other boroughs of New York City.”

“Now the problems of the city are all over the five boroughs,” Kelly continued. “People are moving out in significant numbers. De Blasio has lost the police department. They are reluctant to take proactive measures such as they were doing just or six or eight months ago, so it’s different.“

The former top cop is also “pessimistic” that New York will see a short-term comeback, saying that the pandemic and racial unrest gripping the city “has a feel or sense of being much more long-lasting.”

“[De Blasio] has been a disaster,” Kelly said, adding “I don’t see anything changing significantly, unfortunately, until he leaves office and even then it’s gonna be a bit of a crapshoot.”

“We see virtually nobody on the streets … you do see traffic, there’s automobile traffic, but there’s virtually no pedestrian traffic,” the former commissioner added. “The city has a very different feel than six months ago. People are anxious. People are worried about their own safety.” -Ray Kelly

Of course, according to the Wall Street Journal‘s Jimmy Vielkind, NY Governor Andrew Cuomo shares much of the blame.

As part of the @WSJ’s COVID Storm series, I spent months with @joe_palazzolo & @jacobgershman looking at how @NYGovCuomo managed the early days of the pandemic.

(continued via Thread reader, emphasis ours)…

Cuomo and his small team took command of the Health Dept and overrode local govs that wanted to go beyond the state’s social distancing restrictions. That delayed the New ork City shutdown and slowed the reaction time as the virus spread in nursing homes.

Cuomo’s aides said the state shut down as soon as possible, and that a few days delay didn’t make much difference.

“It’s because it was here for five weeks and nobody knew it,” Melissa DeRosa, the governor’s top aide, said.

Now, the rate of positive coronavirus tests statewide—which topped 40% in April—has been under 1% for more than a month.

Mr. Cuomo and his aides have attributed those results to his tight control over the state’s reopening.

From the beginning, @NYGovCuomo was focused on communicating with the public. While flying with him on the state plane on Feb. 9, he said panic can sometimes be worse than the underlying disaster.

“When the governor got on the phone, he said, ‘Guys, don’t think this isn’t going to happen or that we’re being hysterical or foolhardy. This is what I want, and I want it by tomorrow.’”

.@BilldeBlasio was so concerned by the governor’s reaction that he asked a city lawyer whether the governor had the power to remove him from office, city officials said.

“I found a hot spot, and they did nothing,” said Ed Day, the Republican county executive. “Guidance from Albany is a good idea. But ruling from Albany is not.”

Cuomo was concerned about the ripple effects of closing the world’s financial capital. On Sunday March 15, the governor’s aides had helped the New York Stock Exchange keep its trading floor open by arranging for doctors to screen workers.

While the rates of infection were starting to rise in Southern and Western states, the virus had loosened its grip on New York. The number of New Yorkers hospitalized had remained flat since the middle of May.

In an Aug. 19 radio interview, Mr. Cuomo acknowledged making a litany of mistakes.

“We were late in finding the virus here,” said Mr. Cuomo, adding that he believed the federal government shared some blame. “The collective ‘we’ made many mistakes.”