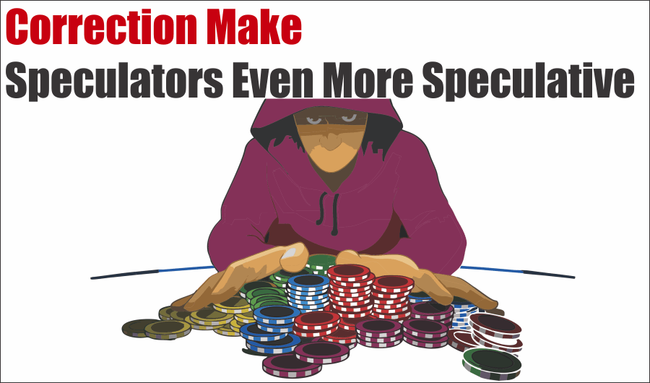 Much of today’s commentary is also in the interview I did on Thursday with our friends over at Peak Prosperity. We discuss the market, portfolio management, risk controls, and why there is potentially still more downside risk to stocks in both the short- and intermediate-term.

The Correction We Warned About

A couple of weeks ago, in “Winter Approaches,” we discussed the potential of the correction this past week.

“None of this data means the market is about to crash. What it does mean, is that a correction of 5-10% has become increasingly likely over the next few weeks to two months.

While a 5-10% correction may not seem like much, it will feel much worse due to the high level of complacency by investors currently.”

When markets are pushing extremes, it seems like it is a “no-lose” scenario for investors. It is at those moments when “selling high” becomes opportunistic, but is incredibly hard to do for the “Fear Of Missing Out (FOMO)”

As shown in the chart below, we had suggested a correction back to previous market highs was likely but could extend to the 50-dma. So far, the correction has played out much as we anticipated.

However, while we expect a rally next week, due to the short-term oversold condition of the market, there is a downside risk to the 200-dma, which is another 5% lower from current levels. Such would entail a near 14% decline from the peak, which is well within the historical norms of corrections during any given year.

For now, the market remains trapped.

Trapped Between Resistance And Support

Thursday morning, I posted our 3-minutes video discussing the market’s failure at the 20-dma resistance.

The chart below shows much of the same picture as above, but with a few more overlays. You can see the failure of the market at the 20-dma and the support at the 50-dma. What is essential are the upper and lower indicators.

As we note below in our “portfolio positioning” section, this suggests that over the next couple of weeks, investors should use rallies to reduce risk.

Speculators Get Even More Speculative

Another reason for our short-term concern is that you would typically expect a market decline to pull some of the “greed” out of the market. Such was not the case this time, and the drop did little to dent the “enthusiasm” of speculative options traders betting on a one-way ticket to wealth.

The chart below is the 10-day moving average of the “put/call” ratio. While the market peaked, speculators got even more “speculative” on “buying the dip.” Such is akin to doubling down in Las Vegas, it may work for a while, but eventually, the “house always wins.”

Let me be clear. In the very short-term, there is a high probability of a market bounce. That bounce should most likely be sold into as the longer-term dynamics remain overbought, extended, and deviated from norms.

Such was a point I discussed with our RIAPRO Subscribers (30-day Risk-Free Trial) last week.

With the potential for a disruptive political election, weakening economic data, and a failure to garner more stimulus for households, the risks to earnings and growth have increased.

On a longer-term basis, the technical backdrop is also problematic.

Importantly, MONTHLY data is ONLY valid at the end of the month. Therefore, these indicators are VERY SLOW to turn but do provide relevant analysis on price trends. However, this is why we use both Daily and Weekly charts to manage portfolio risk.

Over the last few week’s we have repeatedly discussed reducing risk, hedging, and rebalancing portfolios as we suspected this decline was a real possibility. As noted in “Tending The Garden:”

“Taking these actions has TWO specific benefits depending on what happens in the market next.

No one knows for sure where markets are headed in the next week, much less the next month, quarter, year, or five years. What we do know is not managing ‘risk’ to hedge against a decline is more detrimental to the achievement of long-term investment goals.”

With the actions we have taken over the last few weeks, we now have some cash to deploy into assets that provide us our next opportunity.

Getting Back To Even

Such is the primary problem with “buy and hold” investing.

Riding markets up and down is okay to a point, but eventually, the market will decline and provide a real opportunity to buy assets at discounted prices. Unfortunately, since a “buy and hold” strategy never raised any cash, there is nothing to buy discounted assets with. Yes, eventually, the market will recover its losses, and portfolios will return to even. However, you can never recover the time lost. (You also don’t have 100+ years to invest.)

Such is why the primary rule of every great investor throughout history is to “buy low and sell high.” While it seems simple, it is incredibly hard to do, particularly when emotions overtake logic.

Currently, the “speculative frenzy” has engulfed the markets and the media. Such can last a lot longer than most expect, but it will eventually end.

Sometimes, the best investment strategy is knowing when to stop. Remember, no rule states you can’t play again tomorrow after a hot meal and a good night’s sleep.