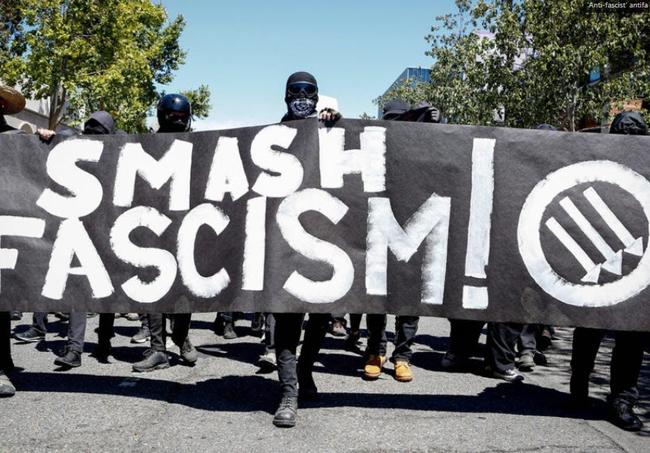 
Authored by Michael Tracey via UnHerd.com,

The former Vice-President is not exactly the type you would imagine clad in all-black combat-style street apparel, hurling commercial-grade fireworks at police officers. Rather, he drafted the infamous 1994 omnibus crime bill in concert with the National Association of Police Organizations. He is even known to venerate the arcane institutionalist ethos of the US Senate — whereas to insurrectionary anarchists, such institutions could only be tools of oppression.

But the Trump Era has an odd way of bringing about unexpected ideological convergences. In the announcement video that formally kicked off his 2020 presidential campaign, Biden paid homage to what he called the “courageous group of Americans” who descended upon Charlottesville, VA in August 2017 to confront an assembly of Right-wing rally-goers. Among that “courageous group” were Left-wing activist factions broadly classified under the banner of “antifa”.

For Biden, what transpired in Charlottesville was a “defining moment,” and formed the basis for his decision to launch a third campaign for the presidency at age 76. While Biden did herald generic American idealism in that announcement video — which would be anathema to most insurrectionary anarchists — in the gravity he assigned to the Charlottesville episode, he also affirmed a core tenet of the “antifa” worldview: the notion that a uniquely pressing fascistic threat has gripped the country, and crushing this threat is a matter of unparalleled world-historic urgency.

Certainly, if you picked any “antifa” member at random, there’d be an almost 0% chance that they would express any kind of personal enthusiasm for Joe Biden. But there’d be a virtually 100% chance that they’d express a great deal of enthusiasm for the theory that “fascism” is an accurate characterisation of America’s current state of governance. Biden would be similarly enthused to present a variation of this analysis, albeit from a slightly different ideological angle. He typically intones things like, “This is not who we are”, rather than “All Cops Are Bastards”.

Still, where Biden is united with “antifa” is in assigning such outsized importance to the role of small-time “fascist” agitators like the ones who gathered that weekend three years ago in Charlottesville (despite ultimately being outnumbered by Left-wing activists) on account of the validation they are purported to have received from Donald Trump. For both Biden and “antifa,” this dynamic constitutes the chief prism through which contemporary American political affairs must be viewed.

And for both Biden and “antifa,” this mode of analysis has been hugely successful. “Antifa” has succeeded in stoking nationwide insurrectionary fervour on a scale unseen in decades. Given their opposition to Trump as the alleged fascist-in-chief, as well as their appropriation of the “Black Lives Matter” protest mantle, they’ve received an extraordinary amount of mainstream liberal legitimation.

Democratic Party operatives have even gone so far as to exalt “antifa” activists as the modern-day equivalents of US soldiers fighting in World War II — while apparently exhibiting no embarrassment for invoking this comparison.

Another clear beneficiary of the “fascism” panic, somewhat paradoxically, has been Biden. A supreme irony of the outsized role that “anti-fascism” has played in post-2016 US political discourse — as popularised by both liberals and leftists, who often claim to be at odds with each other but nonetheless overwhelmingly agree on the underlying “fascism” prognosis — is that it has ultimately limited the possibility of actual Left-wing policy reform.

Democratic presidential primary voters had been traumatised by the non-stop barrage of Trump-related hysteria churned out each and every day by profit-driven corporate media outlets, and laboured under the sincere belief that Trump’s America bears some bonafide relation to Weimar Germany. As such, a plurality were understandably uninterested in foundational reform to the Democratic Party.

That was bad news for socialist Bernie Sanders, who ended up losing handily in the 2020 primaries to a former Vice President whose entire campaign was predicated on little more than restoring the pre-2016 Democratic Party to power.

And in a way, you can’t particularly blame those Biden voters. Because if your main sources of information tell you for years on end that the reins of state have been seized by an out-and-out fascist, who is fuelling a siege of “Nazi” street agitators, whatever deficiencies the Democratic Party might have at the moment are of little or no concern. Now even Sanders himself has called for a “united front” against Trump ahead of the election, seeming to suggest that the precedent of Francisco Franco is historically apt. Wasn’t the whole problem with Franco that he couldn’t be voted out?

Never mind that Trump would have to be quite a feckless fascist to allow himself to be constantly maligned in the country’s major media, plotted against by his own administration underlings, and impeached. The decidedly unsexy reality is that Trump has been a fairly weak executive, at least relative to his predecessors in the postwar era.

But his radically unorthodox communications style belies any dispassionate assessment of this record, thus the fascism-mongering persists more-or-less unabated. And for all the warnings of a Reichstag Fire moment always supposedly being around the corner, the past six months of Covid and riots were a missed opportunity for any genuine fascist seeking to consolidate power. Trump appears largely content with issuing inflammatory tweets.

So as riots continue around the country, and corporate news networks describe post-protest scenes with raging infernos as “mostly peaceful”, the temptation can be to write this off as mere partisan side-taking. Certainly there’s an element of that — most journalists desperately don’t want to see Trump win in November.

But thanks to the prevailing “fascism” framework, their opposition to Trump isn’t just a matter of ordinary election-year preference. It’s imbued with existential, civilisation-altering significance. How could anyone in their right mind not do everything within their capacity to ensure the defeat of fascism? Once you accept the premise that fascism does in fact accurately describe the current state of American governance, all bets are off — journalistically and otherwise.

So even if the “anti-fascists” in the equation are burning down cities, they will still never exist on the same moral plane as the actual “fascists” whose champion occupies the White House. Hence, riots which result in the destruction of huge swaths of Kenosha, WI magically become a “mostly peaceful” affair according to CNN and the New York Times.

Yes, journalists also presumptively ascribe a certain virtue to any protests that occur with the imprimatur of “Black Lives Matter”. But racial disparities have been a fact of American life since the dawn of the republic. The unavoidable explanation for why they’ve taken on such frantic energy in the past several months is the alleged spectre of fascism, namely Trump. With a Democratic President, even one as vanilla as Biden, there will doubtless be future race-based controversies. But they won’t have the cosmic weight as those that occur when a “fascist” president also looms.

Adding to the growing list of ironies, Trump’s primary conception of the presidency has less been Fuhrer, than “Pundit-in-Chief”, whereby he proudly brandishes the role of world’s loudest media critic — with media criticism having been one of his life-long passions. Given that experience, Trump knows how to expertly pry at tensions in how pundit narratives get constructed, and the “peaceful protest” cliché provides all the material that could ever be desired in that respect. Kayleigh McEnany, in tweeting a photo of a recent Trump air hanger rally in Pennsylvania, described the attendees (only half-jokingly) as “peaceful protesters”.

The reason she did this is because if one follows the recent patterns of media nomenclature, any and all “peaceful protesters” should be painstakingly accommodated, even if their gatherings produce widespread arson attacks or increase the Covid-19 infection rate. There is no impartial explanation for why the “peaceful protests” of this past summer deserved praise, adulation, and rousing defences from the standpoint of pandemic mitigation. Again, only does this make sense when inserted into the blinkered fascism vs. anti-fascism context.

One wonders if these protesters and rioters have ever paused to consider why it is that so many establishment media outlets are so consistently eager to advocate on their behalf, with the phrase “largely peaceful” having been stretched well past the point of absurdity. And one also wonders why so many powerful forces are so willing to join in affirming their “anti-fascism” worldview — up to and including, in his own way, Joe Biden. For all the talk about dismantling systems of oppression, those who actually wield power in 2020 America seem to view the “fascism vs. antifascism” dichotomy as awfully convenient to their own self-preserving interests.