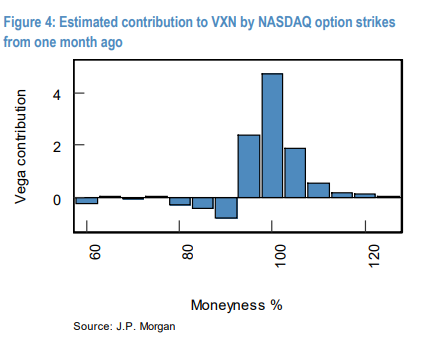 
Back on August 18, a little-followed quant at JPMorgan, Peng Cheng, came out with what may have been the most prophetic (and timely) market analysis in recent months, when he – unlike his “strategist” peers at major banks were trivially hiking their S&P year-end price target to keep in lockstep with the market – urged clients to take cover as he voiced concern about the near-term future of technology stocks, thanks to a combination of factors from a worsening market concentration and factor crowding, to the potential for improving Presidential polls for President Trump, rising rates (a 20 bps increase in the month of August) and increasing US-China tensions.

“With the long-end of the curve already threatening a confluence of threshold signals for yields to break higher, continued price weakness has the potential to trigger another flow of momentum based selling pressure,” Cheng wrote on the last Friday of August, adding that “Rising rate risk and factor crowding, the potential for improving presidential polls for President Trump, and increasing U.S.-China tensions provide reasons for investors to consider hedging near-to-intermediate term risk.”

He was dead on, because what followed just a few days later – in no small part as dealers tried to savage SoftBank’s gamma exposure (which had been mostly closed by then) – was the fastest 10% correction in the Nasdaq from an all time high in history.

So with the burst of selling behind us, and some speculating that the rally will now continues, what does Cheng think will happen next?

As he writes in his latest note, “from a volatility perspective, our observations have not changed since our previous report” and clarifies that “despite the recent volatility, the demand for calls continues to dominate the NDX volatility pricing.“

This means that the core dynamic which we discussed extensively for much of August, namely the relentless increase in implied vol as retail daytraders/SoftBank/whoever bought calls on high-beta, tech and momentum names pushing their stocks to record highs continues, and it was this dynamic that cracked on Sept 3, sending tech into a furious tailspin.

In short, the selling isn’t over.

Below we share some more observations from Cheng’s latest note, in which he first observes the NDX skew has flattened further (Figure 1 and Figure 2). At the same time, implied volatility has picked up alongside realized volatility, and the NDX volatility risk premium remains expensive.

Echoing what we said virtually every day for much of August, the JPM quant also writes that “while both SPX and NASDAQ vol experienced spot up, vol up dynamics in the month of August, we believe the increase in  NASDAQ volatility is driven largely by the demand for calls.” When Cheng decomposed the one-month change in Nasdaq implied vol (the VXN Index) into individual NASDAQ option strikes, he found the call wing contributes to the majority of the increase. This contrasts with the VIX index, where the contribution between calls and puts was roughly equal.

Meanwhile, at the single stock level, JPM also observes skew steepening as we did especially in the case of Apple on Aug 25, even recommending a trade that has since resulted in substantial profits…

…  but finds the magnitude is small relative to history, which of course is to be expected considering “history” includes the devastation from March.

In any event, and what remains the the key point about recent option dynamics, the recent trend is skew is accompanied by a significant pickup in call option trading volume.

Putting it all together, Cheng writes that while he continues to view institutional investors as key drivers in this month’s equity correction – as confirmed by recent revalations about SoftBank becoming a “Nasdaq whale” – with tech/momentum stocks decoupling and reaching extreme overbought levels, retail investors likely played a role as well according to JPM, which notes OCC data on small option trades as evidence as it is a proxy for retail investors…

… while the flattening of skew is also consistent with retail investor behavior. That said, the JPM quant issues a warning, citing his previous academic studies in which he found that “stocks popular with retail investors tend to outperform in the short term but revert those returns in the long term.”

So if the selling is not over, what are the best trades? According to JPM, besides merely shotgunning shorts, a more nuanced trade is QQQ Put ratios: given the current volatility pricing, Cheng continues to favor the put ratio structure for tail protection. In addition to the previously recommended resettable put ratio, the structure in vanilla format also appears attractive. Indicatively, selling 1x 3M ATM put on QQQ against buying 1.9x 3M 90% puts can be entered at zero cost upfront (ref. 277.88). The 90% strike also coincides with a number of medium-term technical supports for the NDX.

A second trade which he pithced recently, but which has run its course for now, is Put vs put dispersion: “Volatility on single stocks have reset meaningfully higher, making the put vs. put dispersion less attractive (Figure 10). Therefore, we suggest waiting for a better entry point to implement the trade.”