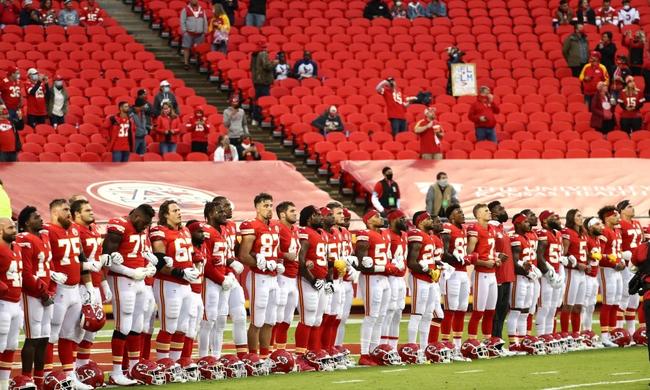 
Last weekend, we noted that primetime ratings for ‘woke’ Major League Baseball dropped over 30% – which joined the ‘woke’ NBA in a ratings disaster.

Now, the NFL appears to be suffering as well – with this year’s socially distanced season opener between the Kansas City Chiefs – the reigning Super Bowl champs, stomping the Houston Texans 34-20 with dismal ratings as well.

Now, those numbers for the 8:25 – 11:30 PM ET game itself will certainly be adjusted upward later, but right now that’s a 16.1% drop over the spectacle of the September 5, 2019 season opener among the advertiser rich demographic. In an America still adjusting to the new normal of live sports in the era of COVID-19, last night’s Kansas City victory also fell 16.1% in total sets of eyeballs from last year’s fast affiliate results – but remember, those numbers will change later today. –Deadline

And while that -16.1% figure will undoubtedly improve as more data comes in, one would think viewership would increase after cooped-up Americans spent the last six months heavily consuming TV shows and movies (which were seemingly exhausted by the end of June).

Perhaps wokeness has taken its toll – as even a “racial unity” moment during last night’s game was booed by fans.

Bold while the NFL also encourages players to kneel during the anthem instead of helping explain why we stand united.