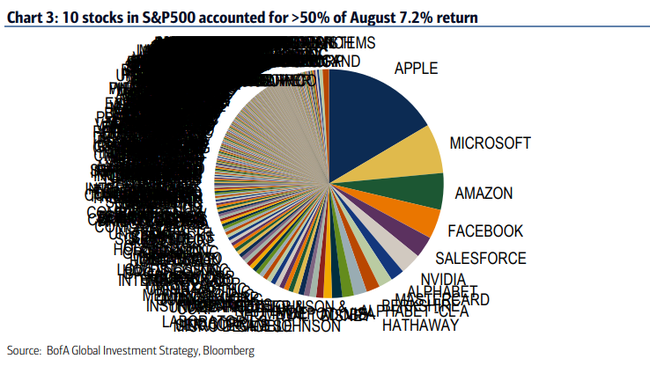 
We have previously shown that the S&P500 is rapidly becoming the S&P5, with just the 5 FAAMG names now accounting for a record 23% of the S&P’s market cap, well above the concentration observed during the peak of the dot com bubble when a similar figure only hit 18% (for MSFT, CSCO, GE, INTC and WMT).

Which is why it won’t come as much of a surprise that according to Bank of America, just 10 S&P stocks (shown below), accounted for more than half of the market’s 7.2% return in August.

What may come as a surprise however, is BofA’s breakdown of who the buyers were since the March lows. In analyzing the positioning of investors via sentiment & flows Z-scores, the bank found that equity buyers in March were mostly “old retail” (high net worth), in April it was the long onlies & hedge funds, while the period of June through August was dominated by “new retail” investors, i.e. Robinhood-type daytraders, although August was a truly history month combining a “vortex of concentration” + new retail + optionality in a historic blow-off top.

This buying frenzy hit a brick wall in September, when the record market fragility in August, represented by a record high call/put ratio, came crashing down in the fastest ever correction in the Nasdaq.

Looking ahead, BofA expects September nerves to steady via the passage of a $1-2tn Phase IV US fiscal stimulus, especially with state & local government funding (commercial real estate the weak spot in US macro), however the narrative of “it’s just an overbought correction” will flip if key market levels are broken, such as SPX 3300, Nasdaq 11000, SOX 2000, and the most crucial of all, is the IG ETF LQD at $134 (which is the Mar high in IG).

In light of yesterday’s news that the Fed bought no corporate bond ETFs in all of August, this may be the weakest link in the coming days, and this is not lost on the market: as the latest EPFR fund flow data shows, the leadership is fading with the smallest inflow to IG bonds in 8 weeks, and the smallest tech & gold inflows in 4 weeks, while bets on inflation are rising, as seen in the largest inflow to EM in 9 weeks.