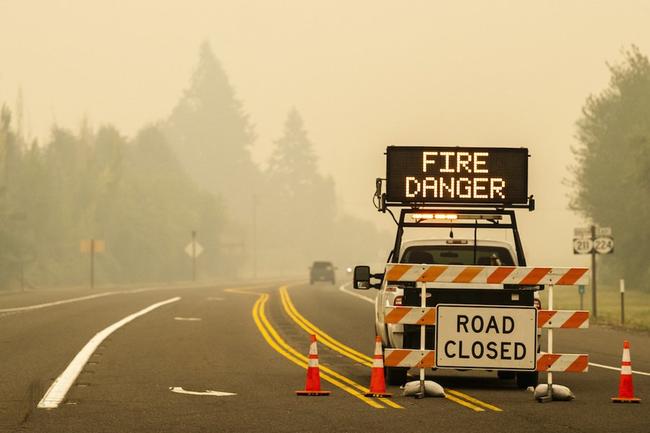 
Wildfires continue to rage throughout Oregon Friday morning, have killed at least three people and forced more than half a million from their homes.

AP cites data from the Oregon Office of Emergency Management, which shows about 12% of the state’s 4.2 million population, or about 500,000 residents, have been evacuated. As much as 1,400 square miles (3,625 square kilometers) have burned across the state this week. State officials said wildfire activity flourished Thursday afternoon in northwestern Oregon as hot weather and windy conditions fueled the fires.

The Northwest Interagency Coordination Center’s latest fire map shows there are many uncontained wildfires across the state.

Readers may recall the U.S. Climate Prediction Center confirmed a broad shift in a weather pattern across the U.S. last month, called La Nina, which has transformed the western U.S. into a tinder box.

“We’re already in a bad position, and La Nina puts us in a situation where fire-weather conditions persist into November and possibly even December,” Ryan Truchelut, president of Weather Tiger LLC, told Bloomberg. “It is exacerbating existing heat and drought issues.”

Gov. Kate Brown has declared a state emergency for the wildfires that extends into early November. She said Thursday, “this could be the greatest loss of life and structures due to wildfire in state history. “

‘In the last 10 years, we see an average of 500,000 acres burn in an entire year. We’ve seen that nearly double in the past three days,’ said Oregon Governor Kate Brown as wind-driven wildfires burned through forests and towns in U.S. West Coast states https://t.co/66vMxeXuo5 pic.twitter.com/1I3aY0BSbb

Even though La Nina has been confirmed, or depending on who you speak to, ‘climate change’, these have been some of the mainstream consensus themes of what could be fueling the fires. But, according to a new report via Reuters, arson investigators have been called to investigate fires as suspicion grows on the origins.

Earlier this week, there was at least one instance, according to Oregon State Trooper Ryan Burke, who tweeted a 36-year-old “Puyallup resident” was arrested on Wednesday (Sept. 9) for starting a fire on the “median on SR-167.”

Joint team effort!! WSP, Fife Pd and Puyallup PD just arrested a 36yr old Puyallup resident. He was caught in the median on SR-167@ Meridian setting a fire! He is currently on his way to jail! Great job everybody!#playstupidgames pic.twitter.com/8N3wHcT5kJ

Local TV station, Q13 FOX, reports “Jeff Demologik” was reportedly arrested by state troopers – here’s the man filming his arrest for setting fire in the median on the highway.

“Right wing militia members in Oregon who are convinced anti-fascists set fire to their town set up checkpoints with guns on roads ppl were using to flee. Who had this on their 2020 bingo card?”

It appears possible that some of these wildfires were not just started by lighting strikes or mishaps with utility companies but possibly there’s a chance arson could be involved.