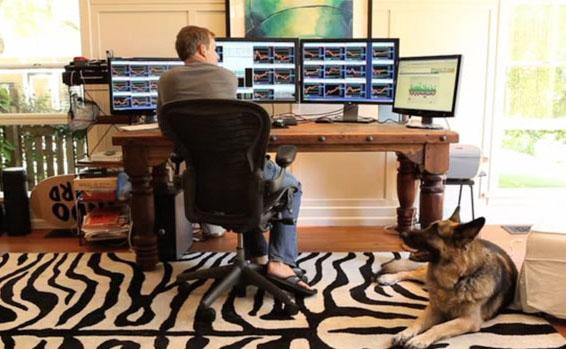 
Earlier today we presented the zeitgeist-defining episode of a top Bank of America strategist whose 16-year-oldson received the following mass text following the implosion of Apple stock late last week: “Guys I am freakin’ out right now Tesla is down 45 points can’t concentrate on Rocket League Billy ask your dad what is going on.” In case anyone needed further proof, that text message is exhibit A that Gen-Z is very involved in this market.

To be sure, we have been following the unprecedented impact daytraders have had on price formation since May when we first described “how retail investors took over the stock market“, it all came to a boil in late August when the daytrading frenzy was supercharged with the help of SoftBank’s brand new strategy of buying call spreads in a very illiquid summer market, sparking the now infamous “gamma crash up“, and which culminated in the fastest Nasdaq 10% correction from an all time high in the first days of September.

And while the debate still rages how much of the gamma squeeze was the result of SoftBank’s “costless collar” and how much the result of Robinhooders YOLOing their way to fame and fortune by buying deep Out of the Money calls, we now know that having suffered a dramatic loss in market cap – despite reportedly generating a $4 billion profit on its public stock derivatives – Masa Son is already “reconsidering” the infamous “Gamma Squeeze” option strategy which was conceived by Askhay Naheta, the man who also responsible for SoftBank’s costless collar in Wirecard back in 2019. The reason: investors has been dumbfounded by the recent revelations, asking if SoftBank is a venture capital investor or had pivoted into hedge fund territory. In any case, as Bloomberg puts it, “the collapse in shares has caused Son to reconsider continuing the trading strategy, but it is not clear what changes might be made.”

Of course, it is possible that this is merely a soundbite for public consumption, one released strategically in hopes of stabilizing the stock price and easing fears that SoftBank will engage in similar strategies in the future, although as we first reported earlier this week, SoftBank is now on the record stating that at least 70% of its public stock exposure has been wound down, which we assume also includes any associated calls and call spreads. Furthermore, the Japanese conglomerate will have to make an update of its publicly held securities in the near future, at which point we will know for certain if SoftBank is indeed out of public equities and has ended its brief flirtation with becoming a hedge fund.

However, whereas Masa Son appears to have learned a lesson about dabbling in risky derivative trades – or rather what it means for his stock price when the public learns through the media that he has been dabbling in risky derivative trades, we can’t say the same thing for the daytrading public which, dauntlessly led by Dave Portnoy whose hourly tweets encourage his 1.8 million twitter followers to keep Buying the Dip and double down…

… has brushed aside the recent modest correction and has Leroy Jenkinsed itself into the latest market ramp, and doing so in a way that would make Masa Son proud: by buying OTM calls in tech names of course.

Consider what happened with Apple on Thursday when the stock opened near $120 and drifted lower all day: as Bloomberg reports, a call with a $120 strike price and expiring the very next day on Friday traded nearly 200,000 times, making it the day’s most-active option. Even more jarring is that trading surged even as the value of the contract plunged over 87% while the stock closed at $113.49 on Thursday – well below the option’s strike – and then expired worthless on Friday when Apple continued to slide following a JPMorgan report that selling of the iPhone 11 has slowed materially. As Bloomberg further points out, despite the trading burst, the option’s open interest only increased by about 10,000 contracts, suggesting that the vast majority of the trading volume was positions opened and closed the same day.

While one doesn’t have to be an expert to figure out what is going on, Nomura’s Charlie McEliggott said that to see such frenzied activity in what’s effectively a one-day option suggests that day traders are behind the flows.

“The Robinhood set continues to play the ‘lottery tickets’ in options market,” said McElligott, adding that “retail is still an issue, if that Apple type flow is indicative of anything.”

The flip side of the so-called short-gamma hedging that lifted stocks is what likely helped to exacerbate moves in the opposite direction. When shares fall, market makers are likely to undo hedges at an increasing speed, spurring more losses. Unwinding the build-up of bullish call options will be a “turbulent process,” according to UBS Group AG.

The reasoning behind this call-buying frenzy is also easy to discern, and has to do with muscle memory and the habituation of making outsized profits for the past 6 months on modestly out of the call options as the market continue to rise. In fact, the call buying was so aggressive in August, that it created its own “gamma” feedback loop which we discussed previously, and which ultimately ended up pushing the underlying stock as dealers had to delta hedge the outsized call buying.

Of course, at some point the piper will have to be paid, as the flip side of this short-gamma hedging that lifted stocks is what also helped to exacerbate moves in the opposite direction, as the drop in shares that started last Friday and accelerated over the next three days as the Nasdaq experienced its first correction since March, prompted market makers to undo hedges at an increasing speed, spurring more losses. The unwinding the all this gamma will be a “turbulent process,” according to UBS.

“They’re using the Nasdaq and they’re using cash positions to try and reduce this risk as much as they can, but that’s a turbulent process,” Kaiser said in a Bloomberg interview, discussing the substantial gamma overhang that has been built up over the past few months. “This is just a process the Street is going to have to go through to digest those large positions.”

And yet, none of that seems to matter for retail investors who were crushed in last week’s bruising finish… and then resumed their buying spree all over again as if nothing had happened.

“It doesn’t seem like that retail flow has been deterred,” said Chris Murphy, a derivatives strategist at Susquehanna.

Meanwhile, as McElligott said “that much accumulated ‘short gamma’ doesn’t just go away in a ~4% flush,” noting that “the Street is still very much in a dangerous space.”

However, judging by the furious return of retail call buyers, none of that matters because as Dave Portnoy said, the market never goes down, and if it does well, then Jerome Powell will just step in and buy everything.