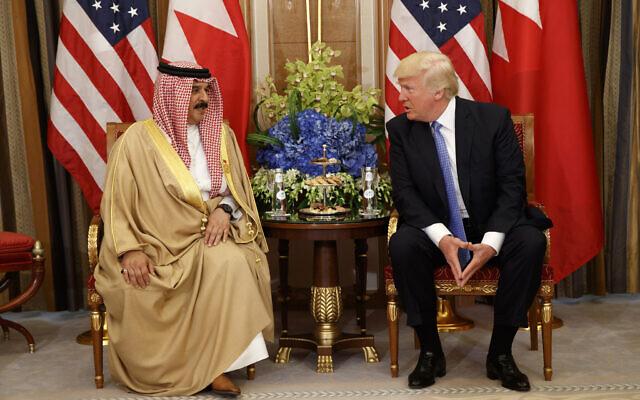 
Bahrain has followed the UAE in becoming the latest Arab nation to normalize ties with Israel as part of a larger diplomatic push by President Trump to strengthen ties between the Jewish state and other Middle Eastern nations, according to the Associated Press.

The agreement was announced by President Trump on Friday during a three-way phone call with Israeli Prime Minister Benjamin Netanyahu and King Hamad bin Isa Al Khalifa of Bahrain, after which they issued a six-paragraph joint statement on the deal – which comes on the 19th anniversary of the Sept. 11, 2001 terrorist attacks by Saudi Arabian hijackers.

As AP notes, the deal “represents another diplomatic win for Trump less than two months before the the presidential election and an opportunity to shore up support among pro-Israel evangelical Christians. Just last week, Trump announced agreements in principle for Kosovo to recognize Israel and for Serbia to move its embassy from Tel Aviv to Jerusalem.”

Another HISTORIC breakthrough today! Our two GREAT friends Israel and the Kingdom of Bahrain agree to a Peace Deal – the second Arab country to make peace with Israel in 30 days!

Trump’s son-in-law and senior adviser Jared Kushner noted that the agreement is the second Israel has reached with an Arab country in 30 days after having made peace with only two Arab nations — Egypt and Jordan — in 72 years of its independence.

“This is very fast,” Kushner told The Associated Press. “The region is responding very favorably to the UAE deal and hopefully it’s a sign that even more will come.”

The agreement will likely be seen as a further setback to the Palestinians who tried unsuccessfully to have the Arab League condemn normalization with Israel until they have secured an independent state. That was one of the few cards still held by Palestinians in negotiations as peace talks remain stalled. –Associated Press

Bahrain will become the fourth Arab country – following Egypt, Jordan and the UAE, to establish full diplomatic ties with Israel, while Oman and Sudan are believed to be on the cusp of doing the same.