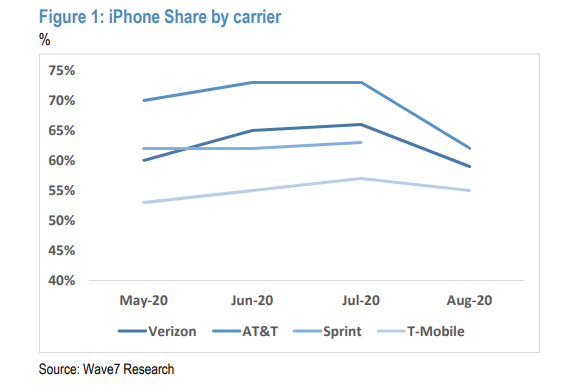 
Apple is sliding today, dropping as much as 3% after JPMorgan analyst Samik Chatterjee (who is overweight on AAPL with a $150 price target) published a note warning that based on recent surveys from Wave7 Research into sales trends across carriers, iPhone sales are “moderating substantially” ahead of the iPhone 12 launch, partly driven by moderation in iPhone 11 series, as consumers are increasingly looking to wait for the fall launch.

And while sales of the low-end iPhone SE appear to be holding up better in recent months at certain carriers, JPM also sees a moderation in momentum for the lower-end iPhone as well.

Key highlights from the Wave7 survey for August include: