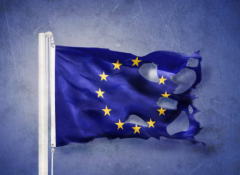 
Authored by Antonis Giannakopoulos via The Mises Institute,

In the wake of the economically disastrous covid-19 shutdowns, the political class has desperately tried to save the failing euro system. On July 21 European leaders agreed on what they called a “historic” deal. It was nothing more than a multitrillion euro stimulus package. However, it is more probable that the “recovery fund” will delay any chance of a much-needed economic restructuring taking place. What it will do is waste scarce resources and capital while setting Europe up for another financial and debt crisis. Another even more important issue is the dangerous path toward political centralization the EU is heading down as a result of the crisis. The European Parliament is very much dominated by pro-centralization forces and contains few individuals who defend the principles of decentralization and economic freedom while seeing with great concern the ever growing power of Brussels.

Has the social democratic project for the EU prevailed?

Even before the signing of the Treaty of Rome in 1957, which created the core institution that later became the EU, there have been tensions between the two paths that a European union should take. The tension is between the classical liberal vision and the social democratic vision. The liberal vision puts its primary focus on defending individual freedom and respecting property rights while promoting a European free trade zone with a robust free market. The treaty of Rome was a major victory for the liberals, as it was built on two basic principles: freedom of movement and the free circulation of goods, services, and financial capital. In short, the treaty aimed at the restoration of rights and values that had been lost during the early twentieth century as nationalism and socialism prevailed in the European Continent.

The liberals also tended to emphasize decentralization, as there is plenty of evidence that decentralization has not been an obstacle to economic progress in Europe. Italy, Germany, and Switzerland (to this day) experienced great progress: competition among varying kingdoms led to more freedom, setting the stage for the creation and rise of the merchant, banking, and urban middle class. Without this the Industrial Revolution, which also took place in an era of decentralization and free trade, would not have been possible.

In a modern “unified” Europe, competition is crucial if the classical liberal vision is to prevail. If currency competition existed, different monetary authorities would be forced to compete, while tax competition would allow people to vote ‘’with their feet” by leaving countries with high taxes.

But this is not a popular view in today’s European Commission.

In contrast to the classical liberal vision, the social democrats view Europe as a protectionist and interventionist empire. The predecessor of this vision was the Napoleonic vision, but the key difference with the EU is that its centralization of power wouldn’t happen through military means, but through legislation and the political process. The European Central Bank, the European Commission, and European Parliament have been very effective when it comes to this task. As economic ties between countries have grown, Europhile politicians have effectively managed to create a pan-European welfare redistribution scheme.

Poorer countries in southern Europe have been unable to cope with the growing regulatory state, but subsidies and wealth transfers from the rich north have helped the southern members adapt to new EU rules while also making poorer members dependent on EU subsidies.

The Euro Is a Political Project

Moreover, EU wealth transfers, combined with a single currency, have allowed poorer countries like Greece, Spain, and Italy to increase government spending and debt while taking few steps to strengthen their private sectors. In other words, centralization, both monetary and fiscal, has allowed the poorer members of the south to follow unsustainable economic and monetary policies.

These trends were in place even before the 2008–09 financial crisis. And then came the bailouts of the Great Recession era and now the covid-19 crisis.

The bailouts during the 2009 debt crisis didn’t only come with an economic cost but with a political one: nation-states gave up their control of internal issues and follow more and more instructions and orders from Brussels on how to run their countries, with grave consequences if they don’t comply. Ron Paul was right when he said that the corruption and political ambition of Europhile politicians and bankers turned the EU into “an unelected bully government in Brussels, where the well-connected were well compensated and insulated from the votes of mere citizens.”

Europe needs more than ever the principles that made it successful: decentralization, free trade, and sound markets. Brexit can be the start. We need a Europe of Switzerlands and Lichtensteins rather than a United States of Europe. A step in the right direction would be a reform toward a pure free trade zone between sovereign states instead of a political union. The common currency would need to be abolished; a currency competition system would be preferable, as suggested by F.A. Hayek.

The union has created a huge division between northern and southern countries, with citizens becoming very suspicious and hostile toward each other. Germans, for example, view southern Europeans as lazy and unproductive while southern Europeans view the Germans as the true rulers of their country. Divisions along similar lines have been around since the early twentieth century, but the EU’s centralization scheme has made them worse. This is exactly the opposite of what the creators of the EU promised.

Now, the European project may be failing, and there are two available options for the future. Either the citizens of Europe recognize the dire consequences of a pan-European welfare redistribution scheme and they refuse to go along with the coming bailouts, wealth transfers, and efforts at renewed political centralization, or we head toward a path of repeated banking and debt crises leading to high inflation and political centralization with even bigger problems down the road.