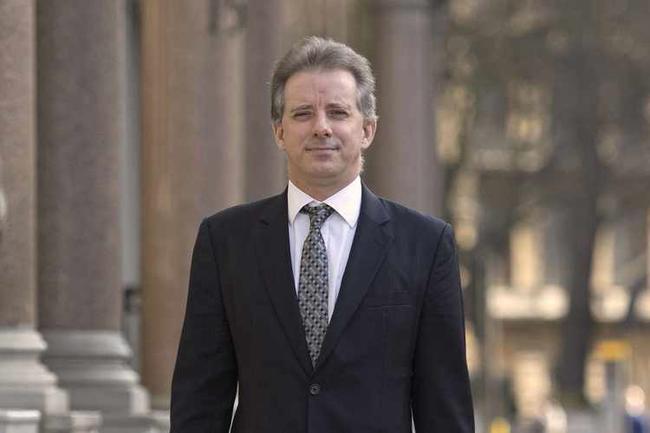 
Authored by Eric Felten via RealClearInvestigations.com,

“Crazy” was the term the FBI agent used to describe the behavior of Christopher Steele, author of the now-debunked Trump-Russia dossier. “I’ve seen crazy source-related stuff in 20 years in New York and this was one of the craziest,” the veteran agent testified to the Senate Select Committee on Intelligence.

Nevertheless, the FBI continued to rely on Steele’s allegations – that Donald Trump and his team were conspiring with Russians who possessed compromising information – to justify its surveillance of the Trump campaign. Without evidence to verify Steele’s claims, the FBI fell back on its assertion that the former British intelligence agent was reliable.

The previously unreported testimony of FBI agent Michael Gaeta is found on page 900 of the fifth and final volume of the Senate committee’s probe of Russian interference in the 2016 election. It raises new questions about the basis of the FBI’s investigation of the Trump campaign, Crossfire Hurricane, and the declarations it made to the FISA court in four separate applications submitted to spy on American citizens.

Gaeta had a long history with the London-based Steele, who had started his own firm, Orbis Business Intelligence, after leaving the British spy service MI6 in 2009. Between 2013 and 2016, the bureau had paid Steele $95,000 to pass along tidbits on Eurasian organized crime; Gaeta was his contact at the bureau. It was Gaeta whom Steele approached in July 2016 with wild and depraved stories of collusion and kompromat. Gaeta became the “handling agent” for Steele’s participation in Crossfire Hurricane. Among his tasks was to get Steele paid (a process that came along slowly) and to see to it that Steele didn’t violate the FBI’s rules on confidentiality.

This requirement for discretion created a conflict of interest for Steele, who was also being paid for the same information by the Washington-based firm Fusion GPS. Fusion, in turn was being paid by the Democratic National Committee and the Hillary Clinton campaign for opposition research on Trump. The Democrats wanted Steele’s information spread far and wide. They also wanted to be able to claim that the FBI was investigating the allegations. Paid FBI informants, however, are not allowed to tell anyone of their work for the FBI or of the bureau’s investigations.

Gaeta was astonished, then, when shortly before the 2016 election an article appeared in Mother Jones titled “A Veteran Spy Has Given the FBI Information Alleging a Russian Operation to Cultivate Donald Trump.” The sub-headline asked, “Has the bureau investigated this material?” Gaeta was convinced Steele was the source for the article and confronted him about it. Steele readily admitted he was behind the Mother Jones story.

The conversation that followed and its aftermath have been described before, but in bloodless ways that fail to capture the importance of that confrontation in determining Steele’s reliability and credibility. For example, a Justice Department inspector general report says “Handling Agent 1 advised Steele that he must cease collecting information for the FBI, and it was unlikely that the FBI would continue a relationship with him.”

“Listen, Is It About the Money?”

Here’s how Gaeta recounted that conversation to the Senate: “Listen, is it about the money?” Gaeta asked Steele. “Because we have the money now. Is it about the money?” The FBI had promised, but had yet to deliver to Steele, $15,000 for one meeting with Crossfire Hurricane agents. The bureau had further promised Steele he would be paid “significantly” for his Trump-Russia research.

Gaeta assumed at first a delay in payment had made Steele go rogue.

“Yes, I’m owed the money, but that’s secondary,” Steele told Gaeta. “I’m very upset about – we’re very upset – about the actions of your agency.” By the “we” in “we’re very upset” one can reasonably infer that Steele was speaking about himself and his client, Fusion GPS head Glenn Simpson (whose client, not counting cutouts, was Hillary Clinton’s campaign).

The handling agent was shocked: “I had no idea what he was talking about.” Before Gaeta could inquire further, Steele started railing about ”your Director” and his “reopening of the investigation.” This was an apparent reference to former FBI Director James Comey’s decision to reopen the probe into Hillary Clinton’s private email server after 340,000 copies of State Department emails between Clinton and her close personal aide, Huma Abedin, were discovered on a laptop used by Abedin and her husband, Anthony Weiner. He was a disgraced congressman under investigation by the bureau’s New York office for sending sexually explicit messages and photos to an underage girl.

At which point it all became clear to the handling agent:

“I’m now understanding that he did this because he was upset that the Director’s reopening of the investigation was going to negatively affect the election for Hillary Clinton.”

The handling agent described his reaction to Steele’s behavior as “surprise and disbelief.”  Gaeta told the Senate that Steele’s actions and attitude weren’t just “crazy source-related stuff,” but “one of the craziest” the veteran agent had seen in two decades of handling sources. The words are significant: Steele’s behavior with the FBI has been characterized as a sort of professional disagreement, uncomfortable perhaps but not unreasonable. Gaeta’s blunt assessment casts things in a much harsher light and undercuts subsequent efforts by the FBI’s top officials to rehabilitate Steele in order to justify using his “reporting.”

Although it has been downplayed until now, Steele’s acting out – and his overtly declared partisan motivations — constituted  a crisis for the bureau, so much so that the handling agent describes it in violent terms:

“After that point – after everybody digests what happened,” Gaeta told the Senate committee, “[p]hones were ringing at that point; people’s ears were bleeding.”

Bill Priestap, left, with Michael Horowitz, DoJ inspector general. Priestap vouched for Steele’s reliability, and that misrepresentation is important because it was Priestap who was responsible for the official launch of the Crossfire Hurricane investigation in the first place. AP Photo/Jacquelyn Martin

Whose ears would those have been? Gaeta’s first call likely would have gone to Bill Priestap, assistant director of the FBI’s Counterintelligence Division.

He had just been made Gaeta’s point of contact at FBI headquarters.

“Management said we were going to close him,” Gaeta told the Senate.

“At that point it’s just obvious. That’s all you could do.” The “management” was Priestap, according to Inspector General Michael Horowitz. “Priestap decided that Steele had to be closed immediately.” Gaeta drew up the paperwork and Steele was removed from the list of official bureau sources on Nov. 17, 2016.

In the wake of Donald Trump’s election, President Obama ordered a multi-agency “Intelligence Community Assessment” of Russian interference in the presidential campaign. James Comey, the director whose actions had prompted Steele to go outside the bureau in the first place, now pushed for Steele’s “reporting” to be included in the document, even though none of it had been corroborated. Comey called Director of National Intelligence James Clapper.

“I informed the DNI that we would be contributing the [Steele] reporting (although I didn’t use that name) to the IC [Intelligence Community] effort,” Comey reported in an email to his top deputies the next day.

“I told him the source of the material, which included salacious material about the President-Elect, was a former [REDACTED] who appears to be a credible person.”

First in the list of recipients of Comey’s email was Priestap.

Priestap would have known from Gaeta that Steele’s behavior was among the “craziest” the handling agent had run into in two decades of source work. He would have known also that, by his own admission, Steele’s motivations were to promote Hillary Clinton’s campaign apparently by sabotaging Trump’s. Yet Priestap went along with Comey’s presentation of Steele as a credible source. More than that, Priestap promoted the idea of including Steele’s allegations in the intelligence assessment, himself writing to the CIA and describing the former British spy as “reliable.”

Finally, Priestap vouched for Steele’s reliability even though he later admitted to the Justice Department inspector general that he “understood that the information [from Steele] could have been provided by the Russians as part of a disinformation campaign.”

Steele Cast as ‘Person of Integrity’

But that’s not how Steele’s materials were presented to the secret FISA court. Shortly after the election, Priestap went with FBI agent Peter Strzok to London to see if they could rehabilitate Steele’s credibility by gathering the opinions of “persons who previously had professional contacts with Steele.” They found some who described Steele as “smart” and a “person of integrity” But several lamented Steele’s “poor judgment” or “lack of judgment” and his habit of “pursuing people [with] political risk but no intel value.” But because Priestap and Strzok did not find any former colleagues to say Steele made things up out of whole cloth, the Crossfire Hurricane team declared him to be credible for the purpose of justifying surveillance warrants.

The willingness of the assistant director for counterintelligence to misrepresent essential information is important because it was Priestap who was responsible for the official launch of the Crossfire Hurricane investigation in the first place.

Gaeta explained to senators just how serious and irrevocable a break it was to “close” a source: ”Once he’s closed, nobody is allowed – we can’t talk to him.”

In this case, that practice was not followed. Priestap’s apparent rationale was that the decision to close Steele as a source was not made because he offered unfounded claims but because he had violated confidentiality agreements by sharing them with the press. And so, the FBI continued to gather new “reporting” by Steele. One of channels was David Corn, the Mother Jones reporter who had written the article about Steele’s accusations. Corn was a longtime friend of then-FBI General Counsel James Baker. Their children had gone to the same school years before and carpooled. Corn gave Steele memos to Baker and then Baker passed them on to Priestap. Thus the strange situation in which an assistant director of the FBI forbade agents from talking to Steele because of the source’s indiscretion with Mother Jones and then proceeded to gather Steele materials through a back-channel relationship with Mother Jones.