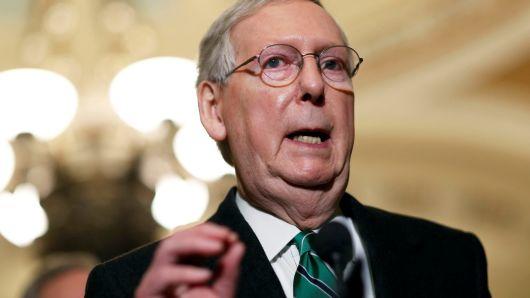 
The US Senate will vote today on a ‘skinny’ GOP bill to provide approximately $300 billion in new COVID-19 aid – a stopgap measure which would renew a federal unemployment benefit, and establish new protections for businesses against liability lawsuits brought during the pandemic, which Democrats have labeled a “poison pill.”

As Reuters notes, this could be the final vote on pandemic relief before the November 3rd elections, as lawmakers will likely focus on wrapping up other work over the next few weeks so they can return to their home states and begin campaigning for reelection.

Some Republican senators expressed doubts on Wednesday that a compromise coronavirus bill would emerge quickly if McConnell’s latest “skinny” bill is rejected on Thursday in the Republican-controlled chamber.

“There’s always some possibility,” said Senator Richard Shelby, adding: “Unless something really broke through, it’s not going to happen.” –Reuters

The stopgap, which is not expected to reach the 60 votes needed in the 100-member chamber to advance Senate Majority Leader Mitch McConnell’s latest bill, comes as Republicans and Democrats remain deadlocked over the larger stimulus package – with Republicans insisting on a bill hovering around the $1 billion mark, and Democrats digging in on over $3 trillion in aid. Nearly $1 trillion of the Democratic proposal would go towards shoring up financially ailing cities and states.

Excluded from Thursday’s GOP bill is an array of other initiatives – including a second round of direct federal payments to households, bailouts for US airlines, and the aforementioned aid to state and local governments.