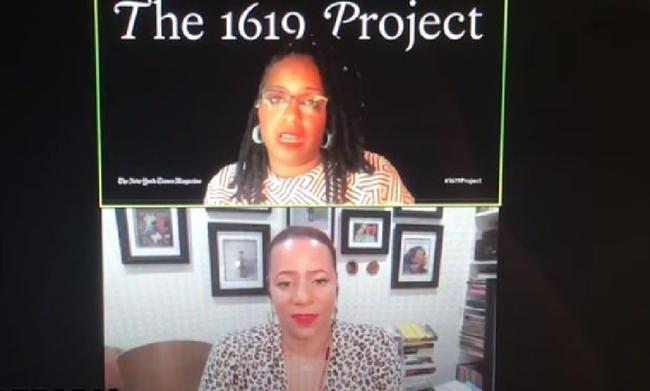 Mount Holyoke College hosted in September its Common Read Keynote with Pulitzer-winning New York Times journalist Nikole Hannah-Jones to talk about The 1619 Project, which was chosen to be this year’s common read.

“I think the 1619 Project should honestly be at every college, university, corporation, and school foundationally if these institutions are truly interested in being anti-racist,” Sanders-McMurtry said.

Hannah-Jones responded by saying, “For the anti-American comments, I feel like people who make those comments have clearly not read the project.”

“Anti-Americanism has been used against Black activists, Black scholars, Black journalists pretty much as long as we’ve been in this country,” Hannah-Jones added. “It’s that our efforts to have our full humanity and full citizenship and to call this country out for its hypocrisies is seen as anti-American.”

As for the project, Hannah-Jones hopes what “that colleges will do is use this one, to lead students to be more critical of what we know, how we know it, how do we get this shared national memory, who created it, what’s left out, what is the purpose of the history that we’ve been taught.”

She also noted that she would argue that our “inability to be honest about who we are” is the reason why President Donald Trump is in office and why “we don’t know whether or not we’re going to have a fair election this fall or not.”

Next, Sanders-McMurtry asked Hannah-Jones if the U.S. would ever have a true democracy, to which she responded that America at its “founding, did not believe in democracy.”

She called the American Revolution “the Revolution of the elite” and claimed that “these elite white men” didn’t intend for America to be a “democratic republic” or “for us to have democracy.”

Hannah-Jones also called it a “fairytale” that “the demographic destiny of our country will turn us into a more interracial democracy,” saying that when “white people” start to “lose an American majority, they always found ways to hold onto power.”

She cited examples of what she sees as “white people” maintaining  “power,” including Stacey Abrams’ failed gubernatorial candidacy in Georgia, the electoral college, noting that only one Republican has won the presidency with a majority popular vote in the last 30-40 years, and voter suppression laws. Ultimately, Hannah-Jones said that she didn’t have faith in democracy, especially since “an open white nationalist and misogynist” who has “led the most corrupt administration in the history of this country” can still win this November’s election.

Campus Reform reached out to Mount Holyoke for comment, but the school did not respond in time for publication.