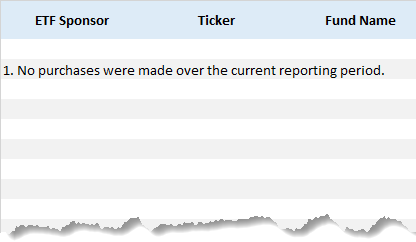 
For much of the past six months, the biggest story was the Fed’s Blackrock-mediated purchases of corporate bonds, either in the primary or secondary market, or via ETFs. As a reminder, while the Fed pre-announced its intention to purchase up to $750BN in corporate bond (including certain fallen-angel junk bonds) in March, it started purchasing bonds in May, and bond ETFs in June (among which such mainstays as LQD and HYG). By directly entering the corporate bond market – something none of his predecessors dared to do even at the depths of the financial crisis  – Powell created what many believe, as GLJ’s Gordon Johnson writes, “the biggest corporate bond bubble, and junk bond bubble, in history (and that all happened before the Fed even started buying).” And, as expected, bond prices, stocks, and ETFs all surged – completely disconnected from fundamentals – while yields plunged, as everyone was trying to front-run the Fed’s pending massive purchases. In other words, by jawboning alone, the Fed accomplished its handiwork.

Yet something odd happened in the month of August when during the peak summer doldrums it was SoftBank’s turn to steal the spotlight with its now infamous gamma meltup – the Fed did not buy a single ETF.

According to the Fed’s breakdown of holdings under its Secondary Market Corporate Credit Facility, as of July31 the Fed owned a total of 112,840,734 shares of various ETFs.

Fast forward one month, to the Fed’s update of its corporate bond and ETF holdings as of Aug 31 and which was published on Tuesday, where we find that the number of ETF shares held is unchanged for the entire month, while the market value of its ETF holdings has actually dipped by $64 million to $8.671 billion from $8.736 billion.

Flipping to the trade level data for the month of August is even more clear: as the Fed itself states, “No purchases were made over the current reporting period.”

Looking at the bond level data showed a similar picture: the Fed bought just $421 million par value ($456 million purchase value) of bonds between July 31 and Aug 28. Notably, unlike in July when Blackrock purchased four Apple bond CUSIPS, in August the Fed stayed away from the world’s largest company. Perhaps it had enough of being publicly shamed for indirectly funding Apple’s record stock buyback?

Dear @federalreserve and @neelkashkari your ongoing purchases of AAPL bonds to fund the buybacks that just made Tim Cook a billionaire are appreciated by all. Keep up the great work. pic.twitter.com/YbZR4oCkrt

After the modest August purchase, the Fed’s total corporate bond holdings rose by $435 million from $3.553 billion to $3.988 billion, an amount which also included the redemptions of several issues by NiSource, FLIR Systems, Digital Realty Trust and Anheuser-Busch.

Why is this notable?

Because as Gordon Johnson notes, not only is the total amount of actual purchases well below the $44.7 billion amount shown on the Fed’s weekly H.4.1 statement  under the Corporate Credit Facilities line item (as a reminder, the remaining $32.1bn in the SPV balance sheet include “amounts related to Treasury contributions to the facility” to ensure that the Fed does not suffer actual losses on its purchases), but more importantly, the $12.66BN of bond purchases to date is a long way away from the $750BN figure the Fed initially said it was targeting, and, as Johnson says “is currently in market participants psyche (i.e., 1.8% of what many continue to think the Fed will spend)”.

What are the implications?

The fact that the Fed effectively stopped supporting the corporate bond market during August, and did not buy a single bond ETF last month, “seems to us to be a stark, yet surreptitious, shift in Fed policy stance” according to Gordon Johnson.

Furthermore, it seems to have gone completely under the radar – i.e., given all the brouhaha surrounding the Fed’s jawboning about massive bond purchases, we would argue, at best, this is pocket change. When the market figures out the “Fed put” is no longer in place, with the Fed’s bond ETF holdings actually falling by -$64mn in August, the willingness to buy stocks at “ridiculous” valuations may quickly abate.

Could it be that the Fed is starting to telegraph to the market that it moved too far, too fast? As Wolf Richter writes, “Jerome Powell has explained this many times – that the Fed has succeeded in achieving its objective of creating loose credit market conditions. It has in fact succeeded in blowing this bubble in the shortest amount of time, and the Fed itself is perhaps stunned by the magnitude of the bubble and its own success.”

As Johnson concludes, it suddenly seems “that for now the Fed does NOT have “your back” if you’re buying overvalued companies that lose money with no end in sight” and furthermore with CPI starting to run hot “it seems the Fed may be seeing the “fruits” of its recent jawboning (i.e., creating a bond bubble and bailing out asset holders during the worst economy in our lifetime, despite not taking any real action) souring a bit.”