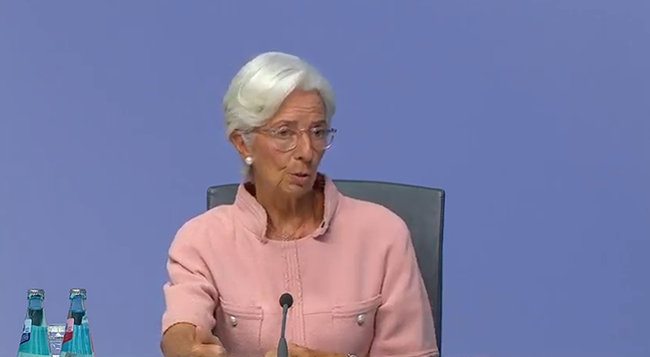 
In what can only be described as the most coordinated trial balloon between ECB sources and Bloomberg, at the very moment that Lagarde started her press conference, Bloomberg reported the ECB would “adopt a weaker phrasing in President Christine Lagarde’s press conference about the euro’s recent appreciation than it did during previous bouts of currency gains” citing people familiar with the matter.

The report goes on to note that the Governing Council discussed the currency’s recent appreciation during its meeting on Thursday, “but the general view was that there is no reason to overreact to its recent rise.”

In January 2018, the ECB’s introductory statement contained a phrase that said: “the recent volatility in the exchange rate represents a source of uncertainty which requires monitoring with regard to its possible implications for the medium-term outlook for price stability.”

Then, moments ago, Lagarde appeared far less committal, instead saying that “the ECB will carefully assess the Euro effect on inflation.” This was followed by the following surprising walkdown:

This likely means that any expectations for an imminent currency war between the US and Europe can be put on hold.

The euro rose to a fresh day high, hitting 1.894 before trimming some gains.

The spike in the Euro pushed European stocks lower, while Bunds extended declines, with the German 10-year yield climbing 3bps to -0.44%.

You can watch Lagarde’s presser here