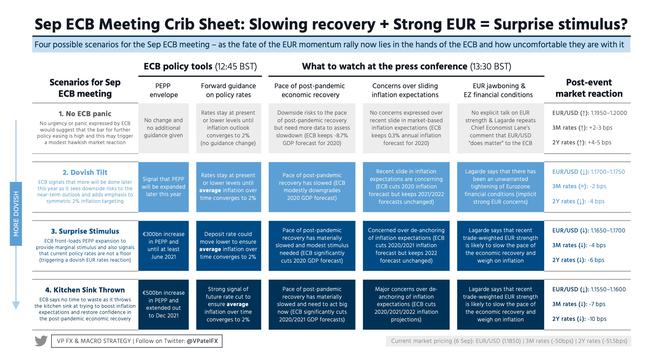 According to sellside consensus, the overarching intention of the ECB on Thursday will be to not appear hawkish by default vs the Fed. As a result, expectations are for the ECB to

Mentions of EUR will be closely watched. Lagarde is expected to mirror Lane’s comments last week about the exchange rate, and there is an outside chance that the ECB may in fact include an objective statement about EUR appreciation in its introductory statement as the ECB is much more concerned about the potential for further euro appreciation rather than about the present level. Somewhat paradoxically, an upgrade of GDP forecasts are expected, as Bloomberg sources suggested on Wednesday which sparked a EUR rally.

Looking at asset purchases, ING analysts say that given objections to using the total PEPP envelope by some in the July account, there will be little appetite to provide much guidance on a further expansion this week; They also believe that Lagarde unlikely to be too heavy-handed on EUR.

According to a Citi FX trader, “The main focus is on growth forecasts and expected jawboning of the currency. Positioning remains long especially in the RM and CTA space and while we expect the ECB to stress the downside risks associated with an increase in Covid cases we don’t expect large movements in spot today. Note we have seen RM start to buy once again (first significant buying since the start of the month), pushing us away from support at 1.1750 and 1.1680. A break of 1.1680 is where the pain starts for RM and the picture will start to look very ugly very quickly is we get through and hold below this area.”

Below is a recap of the key analyst view courtesy of NewsSquawk:

For those who like prefer sheets, here is all you need courtesy of Arkera’s Viraj Patel:

Finally, courtesy of Bloomberg’s Vassilis Karamanis, here is a complete walkthrough on how to trade the Euro: