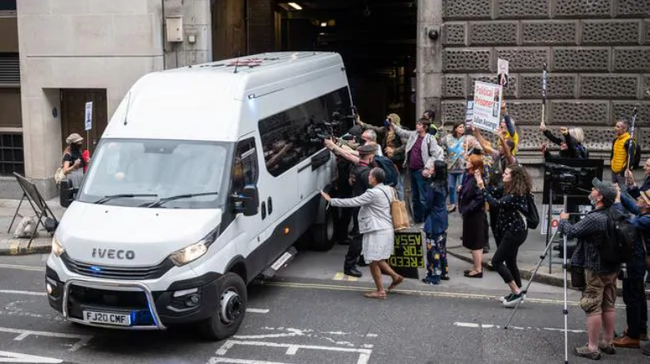 
During the fourth day of resumed Julian Assange extradition hearings the judge has unexpectedly halted proceedings due to one of the lawyers possibly being exposed to coronavirus.

District Judge Vanessa Baraitser said the London hearing has been adjourned until at least next Monday, pending the US government’s attorney awaiting results of a COVID-19 test.

The judge and lawyers for both sides are said to be in deliberations over what course the hearings should take if indeed the US lawyer is confirmed with COVID-19.

The WikiLeaks founder’s defense team is especially concerned over the fragile health of their client, given he’s been held within the harsh and virus-prone confines of Belmarsh prison:

Assange’s attorney, Edward Fitzgerald, said it had to be assumed that the lawyer had the virus and “COVID will be in the courtroom.”

“Court staff themselves would be at risk, and you yourself may well be at risk,” he told the judge.

“Finally, our client Mr. Assange, who is vulnerable you are aware, would be at risk in court.”

Baraitser then reiterated, for those in video link who didn’t hear, that one of barristers on prosecution team may have been exposed to COVID-19. Testing will occur today. Results expected on Friday. #Assange

The New York Times described the hearing’s pause as having happened “abruptly” after it was made known of the US federal government team’s exposure.

Looking forward to the courtroom sketch of Assange in a glass box with only judge in the room as we all proceed virtually. That’ll be quite appropriate image for this case. #COVID19 #AssangeCase

It’s as yet unknown which among the prosecution’s team is undergoing testing, but at this point it’s likely all of them will.

According to notes from journalist Kevin Gosztola, reporting on the trial live from the Old Bailey courthouse, the US attorney’s test results are expected back Friday.