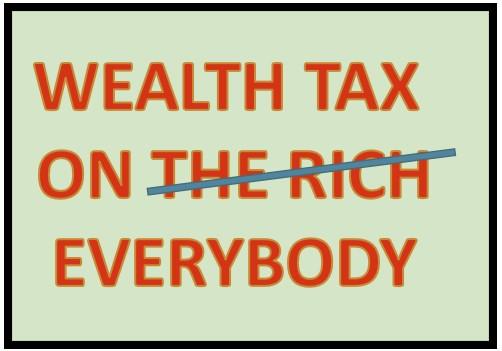 
Authored by Thor Lihaug via TheDuran.com,

Over the last two decades, Western economies have been increasingly driven by debt.  A significant contributor to the 2008 stock market crash was unsustainable debt.

How did we fix the problem? We loaned even more.

Since then Western nations have doubled the national debt levels. The Covid crisis makes it even worse. Governmental rescue programs are on rapid escalation with a huge decline in national fiscal income.  This will have to be financed by either more loans, taxes or a combination thereof. Who or when to pay for it all, is quite unclear, but there will be no escape for taxpayers.  A Wealth Tax (WT) is a recurring hot topic in crises, but a novelty to the UK.

Former US Democrat presidential nominees Elisabeth Warren and Bernie Sanders have already suggested a new Wealth Tax on wealthy Americans.  Joe Biden’s tax proposals are predicted to increase taxes for households at every income level and make the federal tax code more progressive, but he has to my knowledge rejected proposals for a Wealth Tax.  On the other hand, strong forces are pushing him further to the left on the political spectrum and WT is highly supported among left progressives. California Democrats have raised two proposals to raise taxes on the “rich.” Assembly Bill 1253 and 2088 would raise the top tax rates in California – which are already the nation’s highest at 13.3% – even higher with the introduction of a 0,4% Wealth Tax.

In UK the Wealth Tax debate is partially obscured by other political events, as the Brexit debacle.  The WT appears to have eluded the interest of most media outlets however, powerful forces are supporting WT. Many political leaders are already expressing clear support. Member of the OMFIF Advisory Board, Brian Reading (former Economic Adviser to UK Prime Minister Edward Heath) states:

“The pandemic makes the case for a British wealth tax undeniable. A wealth tax helps to reduce inequality. It is an economic and moral necessity. The cost of this outbreak should not be left as a future burden solely on those who work, save and invest to create wealth.”

So, what is Wealth Tax, and what are the experiences?

The wealth tax is similar to a property tax. But instead of taxing only real estate, it covers wealth in all forms: stocks, cash, jewellery, yachts, cars, paintings, — any tangible asset that could be appraised a monetary value.  By contrast, most other taxes are based on income or consumption. Wealth Tax is not a new thing in Europe, but most countries have scrapped it on grounds that it is considered to be counterproductive. Wealth taxes encourage avoidance, evasion, and capital flight.  European wealth taxes generally brought in a mere 0.2% of GDP in revenues, a study from the Cato Institute noted.  Today only Belgium, Norway, Switzerland and Spain are relying on Wealth Tax. Norway is considered to enforce the toughest WT of all, still providing only 1,1% revenue of the GDP in 2017.

The Norwegian WT goes back in time to 1892 when it was introduced together with income tax.  Norway has been ruled by a conservative minority government for the last 6 years but has failed to terminate the WT as promised in the political manifesto. WT holds strong symbolic value to left-leaning politicians.  As with most taxes, once introduced, they tend to live forever.

WT has several adverse effects, acknowledged but ignored by the Norwegian political majority.  I will briefly touch a few of them.

Political support for WT is gathered on claims that WT targets only the rich. There is no common definition of “rich” in the western world, but the presidential campaigns from the US democratic campaigners suggest a WT threshold on USD 32 mill or higher. According to polling by YouGov, 61% of the UK public will support a wealth tax for individuals with assets worth more than £750,000.  On the other side of the scale, the Norwegian tax system defines “rich” on a net worth of only USD 164 000. Hence, 29% of Norway’s full-time wagers pay WT and the number grows steadily by escalating property values.

The stark fact, although no exact numbers have been presented, is that a great number of (the few) extremely wealthy Norwegians have fled the country.  Assisted by sharp lawyers they bring family, jobs, businesses, and assets. This is why the most wealthy and productive Norwegian, no 141 on Forbes 2020, is living in London. Good for UK, but bad for Norway.  Furthermore, WT effectively targets small business owners, homeowners, and any other person or family saving for a college fund, retirement or just for a rainy day.  WT is blind to liquidity and income.  This creates a tremendous and unsustainable problem to taxpayers with “much assets and little cash”.  Small business owners are often hit hard, particularly when the business is not generating income or dividend.  Pensioners owning their own home with no mortgage is also very often in this unfortunate group.

Norway enforced a tax ceiling, preventing anyone to pay more tax than 80% of total net income. The ceiling was removed in 2009 by a labour government, aiming to increase tax on “the rich”. Consequently, there is no upper limit on the total tax bill. The conservative opposition slept on duty and failed to understand the implications. Today, some taxpayers pay more tax than income.  Hard to believe, but yes it is true. This forces some of the most productive citizens to flee the country.  Norway has also passed laws attempting to prevent people from leaving the country – The taxman will come after you for 5 years. It’s like the tax version of Eagles’ Hotel California; “You can check-in, but you can never leave”. Constructive criticism of such a system has been like water on a duck’s back.

Germany’s IFO Institute simulated in 2018 the introduction of a German Wealth Tax of 0,8%. The study presented some very significant findings. It was concluded that WT would annually raise 15 billion euros while giving a revenue loss of 31 billion euros, and with an employment reduction of 2%.  In other words – for every euro gained, two euros are lost.  It is fair to assume that same will apply to most advanced economies, but UK’s Institute for Fiscal Studies (IFS) has no later than this summer, launched a similar study to explore the possibilities of a British WT.  The project is scheduled to issue its report in December 2020.

Taxpayers have all the reason to fear a Wealth Tax. The Norwegian experience and Germany’s pragmatic study conclude that WT is harming national economies. Productive citizens flee the country and the burden of WT is effectively borne by every citizen, even when the tax is designed to target only the rich. WT has completely failed to meet its fiscal objectives, nor does it create less inequality or produce more teachers or nurses.  The political justification is false. A Wealth Tax will certainly not make the UK, or any other nation for that matter, the Land of Hope and Glory.