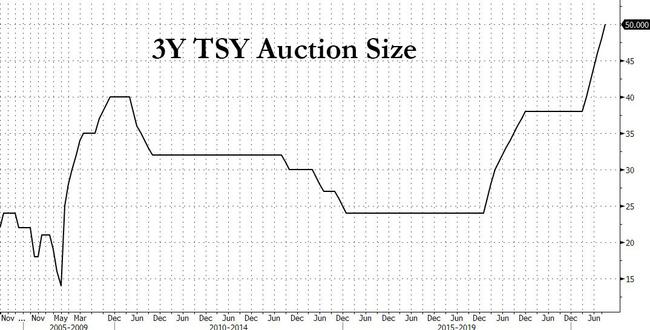 And as auction sizes hit record highs, so do yields do the opposite and for the 3rd auction in a row, the yield on the 3Y auction hit a new all time low, sliding to 0.17% from 0.179% one month ago, which however was a modest 0.4bps tail.

Yet despite the latest record low yield, the auction was anything but strong, with the Bid to Cover dropping from 2.44 to 2.28, the lowest since April, and below the 6-auction average of 2.41.

The Internals were also disappointing, with just 50.7% Indirects, down sharply from 57.0% last month and well below the 54.4% recent average. In fact, this was the lowest Indirect hit rate since February. And with Directs taking down 13.0%, in line with recent auctions, Dealers were left holding 36.3%, the most since April.

No surprise then that with such disappointing metrics, the 10Y sold of modestly on the results although in light of today’s equity carnage, we doubt any selling pressure in rates will persist into the close.